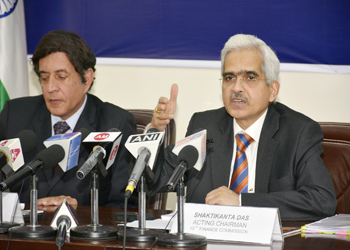 Staff Reporter
ITANAGAR, Apr 6: Acting Chairman of the 15th Finance Commission (FFC), Shaktikanta Das on Friday said the Commission “has an open mind to all issues placed by the state government.”
A 13-member FFC team led by Das arrived here on a four-day visit to the state on Thursday to take stock of the financial requirements of the state government. The team has embarked on a series of visits to various states, starting from Arunachal Pradesh. It will submit its reports to the central government on 31 October, 2019.
Addressing media persons at the civil secretariat, Das informed that the Arunachal Pradesh government made a detailed presentation on the overall financial position of the state.
“Among the various factors highlighted by the state that need to be given weightage are: criteria of population, infrastructure deficit, social backwardness, and border region requirement,” informed Das.
“The state government made detailed representations of the overall financial position of Arunachal Pradesh, including the challenges, opportunities and requirements in sectors like education, tourism, and agri-horticulture. We found that the state has several challenges and, at the same time, potential in tourism, hydropower, agriculture, and food processing sectors,” the acting chairman said.
Das said the state government projected requirements related to sectors like road, power, and border development. “It also informed about the requirements for local bodies’ development and exploiting the state’s hydropower potential, besides informing about the state’s vulnerability to natural disasters,” said Das.
He said the state government has sought assistance to strengthen the state’s disaster fund, and a formula for sharing central taxes. He added that the devolution of resources to the states is decided by the central government, based on the Commission’s recommendation.
“The first aspect is tax devolution to the states; the second aspect is whether the Commission will recommend certain grants for local bodies, urban and the village panchayats. In the third aspect, the Commission will recommend the grant, based on the terms of reference,” he said.
Das also said the FFC is conducting much wider consultations with various stakeholders. “We are spending much more time on stakeholders’ consultations to improve and ensure larger participation,” he said.
On being asked about the population criteria, however, the FFC members refused to divulge details.
GoAP’s presentation
Earlier, the Commission’s members held a meeting with Chief Minister Pema Khandu, Deputy Chief Minister Chowna Mein, the council of ministers, and government officials, and also interacted with leaders of various political parties, tribal leaders, members of local bodies, and traders, and received insight into the opportunities and challenges lying ahead for the state.
In its four-hour long presentation, the state government, led by Pema and Chief Secretary Satya Gopal, apprised the team of the challenges presented by the state’s geographical location, hilly terrains, hostile topography, limited working season, and lack of infrastructure, and sought more fund for infrastructure development.
The state government also said that, Arunachal being a disaster-prone state, the corpus of the NDRF grant needs to be enhanced and ad hoc releases made available at the beginning of the year.
Environment conservation, the biodiversity of the state, and the challenges related to climate change should be taken into account in the context of developmental efforts, and special compensation should be made under CAMPA to strike a balance between economic activities and environmental benefits accrued by the forest cover which is 80% of the state, the state government said.
It also pleaded for a compensatory development plan for the development of Tirap, Changlang and Longding districts.
The chief minister submitted a detailed memorandum to the Commission.
The FFC members expressed appreciation for the constructive and useful suggestions made by the state government for empowering states and ensuring their development.
The team also met Governor BD Mishra.
The FFC members are next scheduled to travel to Tawang to interact with the local stakeholders there. (With DIPR input)