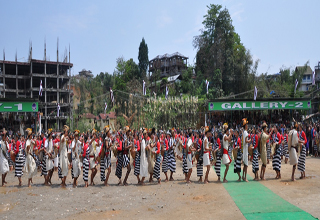 ITANAGAR, Apr 15: Deputy Chief Minister Chowna Mein assured that the government would facilitate the preservation of cultural identity and keeping alive the age-old culture and traditions of tribal communities.
He said this while attending the Longte festival at Nyokum Lapang here on Sunday.
He informed that the government has kept fund provision in this year’s budget for the purpose of preservation and promotion of rich culture and traditions.
Reminding that Rs 1 crore was allocated in the research department last year for documentation of indigenous healing systems, Mein urged the department to utilize the fund purposefully.
He further stated that there is huge scope for cultural tourism and village tourism in Arunachal Pradesh due to its lush greenery and scenic beauties which also provide lots of scope for film shooting in the state.
He invited the guests from the Hindi film industry – actor Shakti Kapoor and director Shiraz Henry, who also attended the festival – to come and shoot more films in the state.
He also lauded Bollywood superstar Salman Khan for promoting Arunachal tourism by releasing a video on YouTube, which the actor has done pro bono to showcase the scenic beauty and tourism potential of the state.
Tourism Minister Jarkar Gamlin termed the Longte festival a unique festival, “which is an environment-friendly and wildlife-friendly festival, as it is being observed without sacrifice of animals and birds during or after the rituals.”
Lauding the Nyishi community for the innovative idea, he urged other tribes to learn and emulate them.
Shakti Kapoor, who was a special invitee, lauded the motto of the Longte festival which is mainly observed to protect crops from cattle by erecting barricades and to offer prayer to the deity for healthy crops and bumper harvest.
He also lauded local film producer, Yumlam Achung for his new forthcoming film, ‘The Little Boy’, directed by Shiraz Henry, and requested the state government to encourage such filmmakers from the state.
Earlier, the guests were given a warm reception with Reekam Pada. The guests also participated in the ritual of erection of barricade, ‘Longte lemin’, at Longte Longbe. Mega dance, group dances and songs were also presented on the occasion.
Earlier, Chief Minister Pema Khandu conveyed his greetings on the occasion of Longte to the people of Arunachal Pradesh. He urged people of all faith and following to join their Nyishi brethren in celebrating their most important festival of the year.
“Let this celebration be another knot in the bond of our unity in diversity,” the CM said.