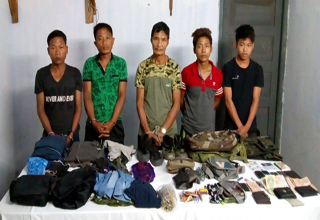 MIAO, Apr 18: The Jairampur Battalion under the aegis of Dao Division apprehended four Eastern Naga National Govt Group (ENNG) operatives Self Styled Major Thaimong Mossang and Awang Hodung and an over ground worker during an operation in Miao town under Changlang district on Tuesday.
Acting on a specific intelligence input about the operatives trying to terrorize and carryout recruitment activities in Miao town, the Jairampur Battalion swiftly launched an operation and cordoned the suspected location.
On being challenged, the operatives of the banned outfit tried to flee but the troops chased them down and overpowered them. (PRO Defence)