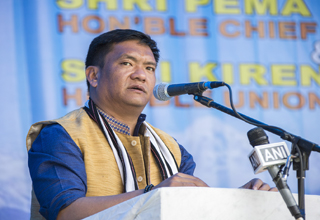 CHAYANG TAJO, Apr 28: Chief Minister Pema Khandu said that the committee report on the proposed greenfield airport is ready and will be placed in the next cabinet meeting scheduled on 10 May.
“A decision in this regard will be taken in the cabinet, and accordingly, the central government will be intimated on the situation,” Pema said during a public meeting here in East Kameng district on Saturday.
He informed that Pasighat and Tezu will be connected through commercial fixed wing aircraft services within the next few months.
“The state government, with support from the central government, is connecting all administrative headquarters and gram panchayats with digital connectivity. Once digital connectivity is assured, the establishment of an SBI bank branch in Chayang Tajo will be expedited,” Pema said in response to a public memorandum demanding an SBI bank in the area.
On the demand for a helipad, the chief minister asked the locals to propose a suitable location, and assured to sanction funds within this year for it.
The chief minister exhorted the people to work together for the development of the area. He appreciated the work of the local MLA in bringing a sea change in the development of the constituency.
On the deteriorating Seppa-Chayang Tajo road, the chief minister assured to request the deputy chief minister to convene a review meeting with the engineers concerned, company officials and the local administration to find an early solution to the problem.
Earlier, the chief minister inaugurated the state’s 36th VKV here, and announced Rs 7 crore to meet the requirement of Rs 10 crore corpus fund for the school.
He informed that the state government has sanctioned Rs 40 crore as corpus fund to strengthen the VKVs in Arunachal.
Later, the CM inaugurated the office of the Chayang Tajo additional deputy commissioner, and laid the foundation stone for Tagampu smart village.
Union MoS for Home Affairs Kiren Rijiju, who accompanied the chief minister, laid the foundation stone for the VKV’s girls’ hostel, which has an intake capacity of 180 students. He also inaugurated a football stadium and an academic block of the government polytechnic here.
Speaking on the occasion, Rijiju said East Kameng district has seen the highest mobilization of funds for roads, and expressed hope that connectivity within the district would be improved in the next few years.
He informed that under his initiative, flow of funds has been strengthened under the BADP to meet the developmental requirements. Also through his personal initiative, several measures in the health sector and in community development have been taken with CSR funds, he said.
Parliamentary Secretaries Mama Natung and Tapuk Taku, local MLA Karya Bagang, Arunachal Press Club President Chopa Cheda, and AAPSU president Hawa Bagang accompanied the chief minister. (CMO)