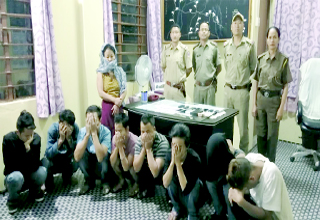 ROING, May 13: The police here in Lower Dibang Valley district recently apprehended nine persons for drug peddling, and two police personnel for their involvement in the trade.
On receiving a tip-off, a police team comprising Sis Abraham Taying, Mohan Milli and Padi Nikang, along with constables Monu Sonowal and Mikhail Mito conducted a raid in the house of one Yubi Mega at Cheta-II and apprehended three persons.
The police seized four packets of cocaine weighing 14.5 gms from their possession.
On examination at the police station, the arrestees revealed that they had gone to Changlang and bought the drugs from a Chakma person on 11 May.
They also revealed the names of other peddlers who had given them money to buy drugs on their behalf.
Another raid was instantly conducted in the house of one Atoga Pulu at Mayu-II. The police team on arrival found Pulu and his mother Samine Mega packing the drugs, reportedly for sale.
A plastic packet, containing cocaine weighing 3 gms, two digital weighing devices, and Rs 34,300 in cash were seized from their possession in the presence of Deputy Superintendent of Police (Hq) Opir Paron and CO Sanjay Taram.
Interrogation of the mother-son duo led to the arrest of their fellow drug peddlers Sokho Mendo, Biju Mega, Shiv Linggi, and Ege Miso.
Reportedly, Miso is a government employee.
A case has been registered at the Roing police station under the NDPS Act.
On receiving unofficial complaints against the involvement of police in drug peddling in the district, SP Sanjay Kr Sain informed that two police personnel allegedly involved in drug peddling have been arrested and are in custody.
They have also been placed under immediate suspension. (DIPRO)