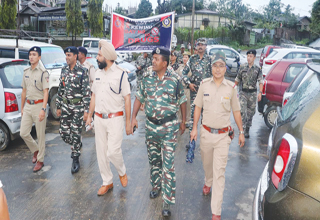 Personnel of the capital unit police, led by SP Sagar Singh Kalsi, and the CRPF take out a route march against drug abuse to mark International Day of Families on Tuesday. The marchers started from the SP office and covered parts of Itanagar township, including RK Mission Hospital, Akashdeep, and Bank Tinali, before culminating the march at the Itanagar police station.