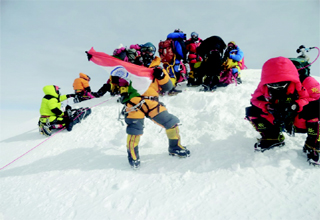 [ Karyir Riba ]
ROING, May 16: Muri Linggi of Roing has become the third woman after Tine Mena and Anshu Jemsempa from Arunachal to conquer Mount Everest-the highest mountain peak in the world.
Mother of four daughters, Muri (40) reached the summit of the Mount Everest at 8 am on 14 May.
Her expedition was flagged off on 5 March at Roing.
She started from Roing to Kathmandu on 7 April and started her expedition to Mount Everest on 12 April from Lukla. She reached the base camp on 20 April.
After her attempts to move forward with the expedition was foiled due to inclement weather, she started for Mount Everest again on 10 May at 1 am. After four days of trekking, both at day and night time, she reached the top of the peak on 14 April.
“It usually takes the climbers five days to reach the peak from base camp. Linggi cut her time short by not stopping her climbing even during the night time,” informed DSO Raju Mipi.
Linggi is in good health and is expected to return home in a few days, said Mipi.
She did her basic course in mountaineering from the National Institute of Mountaineering and Allied Sports, Dirang in 2013 and was a part of the women expedition team to climb Peak Menthosa in Lahaul and Spiti, Himachal Pradesh.
Muri completed her advance mountaineering course from Darjeeling in 2016 and climbed the Gorichen Peak in October 2017. Now she has realised her dream of summiting Mount Everest. (With inputs from DIPRO)