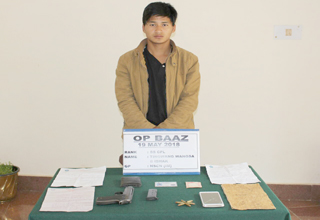 TISSA, May 19: Security forces have apprehended a hardcore NSCN (IM) militant from here in Tirap district.
Tingwang Wangsa @ Aisak Wangsa, a self-styled private of the outfit, was apprehended during an operation by troops of the Indian Army in the early morning of 19 May, according to Kohima-based Defence Spokesperson Col C Konwer.
A pistol along with live ammunition was seized from him. The militant was allegedly engaged in carrying out extortion activities in Khonsa town.