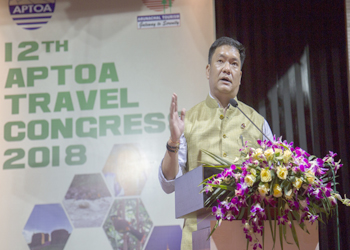 CM for relaxing PAP system for foreign tourists, no relaxation in ILP system
ITANAGAR, May 25: While saying no to making any relaxation in the inner line permit (ILP) system in Arunachal Pradesh, Chief Minister Pema Khandu opined that relaxing the Protected Area Permit (PAP) system for foreigners would be beneficial for the state “from the tourism perspective.”
“Remaining within the existing laws but with few relaxations (in the PAP system) here and there, our tourism sector can grow in leaps and bounds,” he observed in his address at the 12th Arunachal Pradesh Tour Operators’ Association (APTOA) Travel Congress in the legislative assembly auditorium here on Friday.
Many areas of the state with tourism potential come under restricted or protected areas, he said.
“With the hydropower potential of the state yet to be tapped to expectation, tourism is the only viable and available sector that could help Arunachal develop economically, followed by agriculture and allied sectors,” Pema said.
He lamented that despite being touted as the ‘powerhouse of the country’, the development of hydropower in the state has “many facets that need to be addressed before it is harnessed.”
Since awareness on the state’s “hydro-potential” and its long-term benefits is yet to percolate down to the people, harnessing this potential to the optimum may take time, he said.
“In the meantime, we need to concentrate on our next viable potential sector, which is undoubtedly tourism,” he said.
Lauding the APTOA and its president John Panye, the chief minister said the state’s tourism sector has “grown exponentially during the last couple of years” because of the association’s sincere efforts.
APTOA general secretary Bengia Mrinal informed that the state witnessed the visit of over 26 lakh domestic and 52 thousand foreign tourists this year – “a commendable increase from last year.”
He said members of the APTOA have so far generated revenue of about Rs 17 crore for the state exchequer.
But the CM asserted that, despite the increase, the state is way behind the national average and has to work much more in this line.
“Despite the increase in tourist inflow to the state, we are far behind when it comes to what we have to offer in terms of potential. With the immense potential available here, we can attract tourists several times more than what we are doing right now,” he said.
The chief minister also urged officers of the tourism department to finalize the draft of the State Tourism Policy, which will chalk out a roadmap for the sector to grow.
He assured the state government’s commitment to support the sector, and informed that Rs 144 crore has been allocated to the department in the current budget “to promote tourism in a big way.”
The chief minister, who held the tourism portfolio in the erstwhile government, admitted that the sector had not received as much of the government’s attention as it should have. He said that during his tenure as the tourism minister, budget allocation was a mere Rs 18 crore, which also included salaries of the department’s employees.
However, as soon as Pema became the CM, the allocation was enhanced to Rs 70 crore.
During the congress on Friday, he announced a corpus fund of Rs 1 crore for the APTOA to take up initiatives for its growth.
The CM urged local businessmen and entrepreneurs to invest in the tourism sector and create infrastructure favoured by high-end tourists. In this regard, he advised them to take advantage of the Deen Dayal Swawlamban Yojna, which offers 30% subsidy to loans upto Rs 1 crore for projects, including in the tourism sector.
MoS for Home Kiren Rijiju emphasized on projecting and promoting Arunachal Pradesh as a cultural tourism hotspot.
“Arunachal Pradesh has got everything to satisfy the taste of every visitor,” he said, and called for “inculcating the right attitude towards visitors and creating a clean image of the local hospitality.”
On the controversy over the Centre’s view to relax to some extent the purview of the RAP/PAP, he said the demand for it has been made by successive state governments to increase the inflow of foreign tourists.
He pointed out that the relaxation, if made, would not affect the demographic profile or create any security lapses.
The inaugural session of the congress was also attended by Legislative Assembly Speaker TN Thongdok, Cabinet Minister Dr Mohesh Chai, Tourism Parliamentary Secretary PD Sona, legislators Laisam Simai, Tesam Pongte and Gabriel D Wangsu, and officials of the tourism department.
Among others, Indian Association of Tour Operators president Pranab Sarkar, Adventure Tour Operators’ Association of India president Capt Swadesh Kumar, Association of Domestic Tour Operators’ of India president PP Khanna, the tourism ministry’s Regional Director Shoeb Samad, and Everester Anshu Jamsenpa attended the congress.
Muri Linggi, who recently scaled Mt Everest, was felicitated during the event. (CMO)