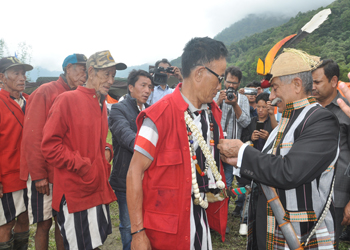 SARLI, May 25: Governor BD Mishra, who was on a four-day tour of Kra Daadi and Kurung Kumey districts, reached Sarli – one of the remotest forward military outposts along the Sino-India border – in Kurung Kumey district on Thursday, becoming the first governor of the state to visit here.
During his interaction with the personnel of the Indo-Tibetan Border Police (ITBP) and the Indian Army at the outpost, the governor encouraged them to keep up their high morale, their “excellent standard of discipline,” and their goodwill projects to reinforce their relationship with the local people.
The governor, who was accompanied by his wife Neelam Misra, also visited the army’s firing range in Sappe village, where he urged the locals to join hands with the armed forces in strengthening the border. He highlighted the importance of the firing range for maintaining the war worthiness of the troops, and for the security of the nation.
Earlier, on the governor’s maiden visit to Sarli circle, local MLA Pani Taram apprised him of the challenges faced by the people of the remote area, particularly in terms of surface communication.
The governor advised the villagers to plant cash crops and experiment with new crops to enhance their income. He asked the MLA and Deputy Commissioner Kanki Darang to provide soil testing facility to enable the farmers to grow different types of crops and horticulture produce.
Mishra gave assurance to the people of Sarli and Sappe that a doctor from the ITBP would be posted here for the benefit of the villagers. He also assured them that he would explore the possibility for establishing a good school in the area.
As a token of appreciation, the governor presented ‘Team Arunachal Pradesh’ lapel pins to the gaon buras and gaon buris. (PRO)