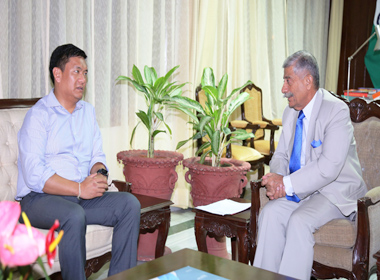 ITANAGAR, Jun 11: Governor BD Mishra commended Chief Minister Pema Khandu and the state government for following up on the implementation of developmental schemes, and expressed appreciation for the commencement of the distribution of new NCERT books to the schools in the state.
The chief minister had called on the governor at Raj Bhavan here on Monday to discuss developmental issues including education, road communication, tourism, music and football institutes, textbooks, and security.
The governor, who has been closely monitoring the distribution of textbooks, emphasized that the new books must not be kept in the stores but distributed to the students at the earliest.
During his district tours, the governor had noted that the students of government schools in the state had not been provided with new NCERT books for three years.
Discussions were also held on further strengthening the education system and the state public service commission.
The governor also shared with the CM the issues he discussed recently with the prime minister and other union ministers and secretaries, and the chiefs of the armed forces. (PRO, Raj Bhavan)