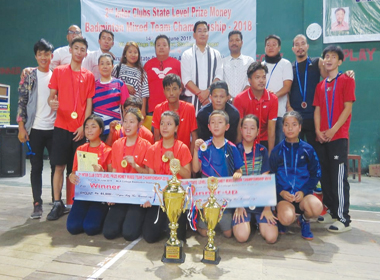 Staff Reporter
ITANAGAR, Jun 16: Tankakso Badminton Club (TBC) of Tezu, Lohit, won the second State Level Inter-club Prize Money Badminton Mixed Team Championship, defeating Capital Badminton Club (CBC) 3-0 in the final match at the MLA Cottage badminton hall here on Saturday evening.
The winners were awarded cash prize of Rs 65,000 while the runners-up was given Rs 45,000.
The awards were presented by Sports & Youth Affairs Minister Dr Mohesh Chai and DoTCL Parliamentary Secretary Tesam Pongte.
Earlier, addressing the closing function, Dr Chai said he would undertake the initiative to start the construction of the Dorjee Khandu Badminton Academy here, for which the state government has earmarked Rs 10 crore in the budget.
Dr Chai said someday soon the shuttlers of the state would represent the country at the highest levels.
He hailed the Arunachal State Badminton Association (ASBA) for making tireless efforts to promote and develop the sport in the state.
Dr Chai, who recently took over the charge of the sports department, also said he would give his best towards the development of other sports in the state.
He expressed hope that the championship provided an opportunity to the participants to show their latent talents.
Pongte urged those who could not make it to the final not to lose heart “as winning and losing are part and parcel of any game.”
Tourism Parliamentary Secretary PD Sona also attended the closing function.
The championship was organized by the ASBA under the aegis of the Badminton Association of India.