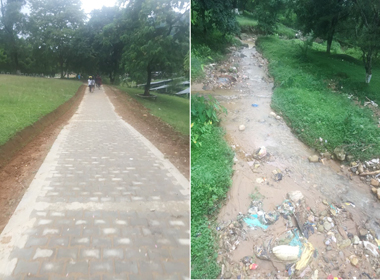 [ Tongam Rina ]
ITANAGAR, Jun 17: Indira Gandhi Park, the only green space in the capital town, is rapidly being concretized in the name of a facelift by the government.
In February last year, the government decided to provide Rs 6 crore under the Compensatory Afforestation Fund Management and Planning Authority (CAMPA) for upkeep of the park. In a meeting chaired by Chief Minister Pema Khandu, it was decided that the park would have separate paths for joggers, along with footbridges, dustbins and toilets, as well as solar lights – apparently on the advice of the forest department.
The joggers’ path is being laid now, all concrete, defacing the park.
Talking to this daily, Arunachal Pradesh PCCF Omkar Singh said the park is being developed and that there is plan to build a bridge as well. 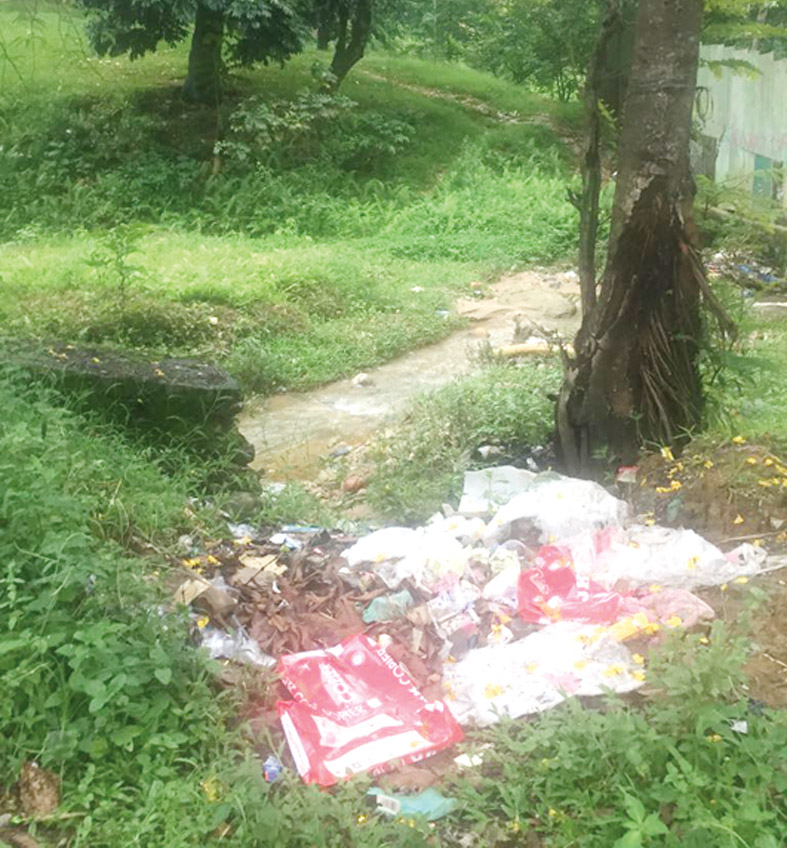 The only consolation is that the upcoming bridge will be wooden.
When his attention was drawn to the absence of dustbins inside the park, he said there were dustbins inside the park. “And if they are not there, the department will put some up soon.”
This daily was not able to contact the social forestry DFO, who is in charge of the upkeep of the park.
It is for everyone to see that the park does not have enough dustbins.
The PCCF said his department has written to the administration to obtain a no objection certificate before allowing any private event in the park.
The forest department says that, apart from official events, for which the government has to pay a fee, other programmes are not allowed. However, it said, the state administration routinely flouts the rule.
An official of the state government says that it rarely allows any non-governmental programmes inside the park and those few who have been allowed give rentals to the state government.
Though there is a government order against holding any private events, the park remains a popular venue for melas and other programmes.
“The government gives permission against its own order by allowing private organisers of events to use the park,” said a forest official.
While the forest department says that the state administration does not seek permission before holding such events, the pertinent question is who owns the park and its mismanagement?
The forest department obviously has not been able to get a grip on its own jurisdiction as it remains a silent spectator to the defacing of the park, littering, and events allowed by the state administration for a fee.
On the other hand, the capital administration has come up with its own set of rules regarding organization of programmes and upkeep of the park.
The rules include a security deposit of Rs 50,000 – non-refundable if the garbage left behind by the organisers is not cleared. So far, there has been one instance where an organisation had to forfeit the security money for littering.
Apart from the forest department’s questionable idea of concretizing the park and its meek indecisiveness about its own jurisdiction, citizens who use the park have left a trail of garbage by turning the park into a convenient garbage dump. Even though the state government, the district administration and the Itanagar Municipal Council have been making every effort to keep the capital clean under the Swachh Bharat Abhiyan, the citizens – at least the ones using the park – seem to be disregarding the entire effort by dumping garbage everywhere.
The entire park is littered with chips and ice-cream wrappers, water bottles, condoms, and syringes, among other things.
The stream, which is beautiful in spots where it is it not littered, is chocked with all kinds of litter. It is a matter of time before the stream is killed altogether with garbage.
The park barely has any free space left since half of it has been encroached on by private individuals and the government itself.
To counter rampant encroachment by private individuals, more than a decade ago, the government did the same. The result is for all to see.
What is ironical is that the CAMPA fund is being spent on concretizing instead of reclaiming the park through more plantation plans.
The fund is basically meant for afforestation, regeneration of the forest ecosystem, wildlife protection, and infrastructure development.
IG Park needs afforestation, not concretization in the name of infrastructure development.
In a concrete town, IG Park is the only space left for walkers and sports enthusiasts – a getaway for families and friends, away from the dusty concrete town we call home – and for visitors too.
The little green space is being taken away right in front of our eyes, with the main culprits being the government, which is concretizing what is left of the park, and the citizens, who do not seem to think twice before littering the space.
It is time we gave back to the park by making it greener. IG Park is the only place in entire Itanagar where we meet up to celebrate when there is a public function like the Arunachal Day, and also a place to stage protests against the system.