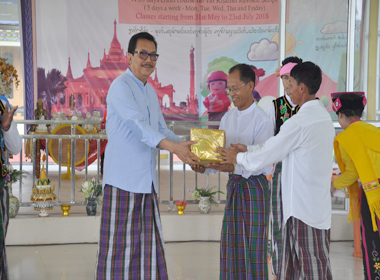 NAMSAI, Jun 24: Deputy Chief Minister Chowna Mein said he would soon seek approval for creation of teacher’s posts for the Tai-Khamti language before the state cabinet, which will be introduce as the third language in the Tai Khamti inhabited areas from this session.
He said that Khamti is the only language that has its own script after Bhoti language in the state and it needs separate trained teachers to teach the language.
Mein informed of this proposal during the Tai Khamti Heritage & Literary Society organised felicitation programme of the resource persons from Khamtilong (Myanmar), who were imparting training cum crash course to the trainees in the ongoing workshop on Tai Khamti revised script and literature at Kongmukham (Golden Paghoda) at Noicheynam (Tengapani) here on Sunday.
He further stated that Khamti is a literally rich tribe and lauded the youths for showing keen interests in the language. He appealed every member of the society, the elite and NGOs to cooperate and promote it for betterment of all.
“As an elected representative and as part of the government, I am just a facilitator but the lead role should be taken by the elite groups of the society, community based organizations, educated youths and NGOs”, he said.
He also expressed happiness that girls are also catching up and able to teach in the Tai Khamti Script, while citing that it was once taboo for girls/ females to enter the Buddhist temple because of which females members could not learn the Tai Khamti Script as it was taught inside the temples only.
He requested Namsai Deputy Commissioner RK Sharma and DDSE T Pabin to introduce the Tai Khamti Script as the third language in the private schools too in Namsai district and asked them to work out modalities and issue directives accordingly.
He also welcomed the step to make teaching of the Tai Khamti script compulsory in temples and monasteries of Tai Khamti inhabited areas, which would go a long way in preservation and promotion of the language.
Mein also thanked the four resource persons from Khamtilong, Myanmar for sparing their valuable time for such a long period at Kongmukham to impart much needed training on the revised script of Tai Khamti Literature.
Parliamentary Secretary for Planning & Investment, Personnel & Training, Chau Zingnu Namchoom also lauded the trainees for their fast learning capabilities and talents. He said that the art of teaching using different methods through singing, dancing and painting, etc shown on the occasion were impressive. He said such different techniques of teachings would be effective for teaching and promotion of the Tai Khamti language.
On the occasion, Tai Khamti books on song, prayer, grammar, dictionary (Tai Khamti to English) and poetry were released and distributed.
The trainees spoke on how to go about the teaching of the revised Tai Khamti script to make it popular among the masses and also presented songs, dance and their paintings on the occasion.
Resource persons from Khamtilong (Myanmar) were Venerable Nerapatti Bhikkhu, Venerable Asim Sujara Bhikkhu, Chowroi Thonrai Mutong and Nangchoi Mowate Longchet.