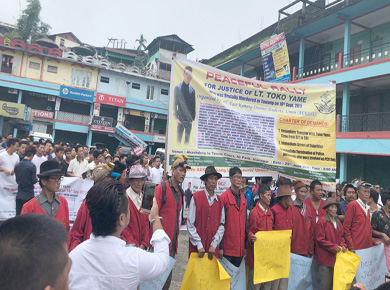 Staff Reporter
ITANAGAR, Jun 25: Demanding immediate justice for Toko Yame, a class XII student who was allegedly murdered in Tawang under mysterious circumstances in September 2017, student bodies served a 15-day ultimatum to the state government.
The organisations warned that failure to address the ultimatum would invite economic blockade against Tawang district.
Hundreds of people from all walks of life joined the peace march organized by the All East Kameng District Students’ Union (AEKDSU) demanding justice for Toko on Monday morning. The rally started from Akashdeep and culminated at the tennis court in Indira Gandhi Park here.
The AEKDSU demanded immediate transfer of Toko’s murder case from the Special Investigation Team (SIT) to the Central Bureau of Investigation; immediate arrest of the culprits and termination of police personnel involved in the police control room duty during the incident.
Drenched in the morning rain, 14 gaon burahs from Bana circle of East Kameng district also joined in the peace march along with the students’ organisations.
Condemning the brutal murder of the school boy, All Arunachal Pradesh Students’ Union (AAPSU) general secretary Tobom Dai warned the state government that the issue would spill over across the state if justice is not delivered. Dai further held Chief Minister Pema Khandu and Home Minister Kumar Waii responsible for failing to deliver justice to the aggrieved family.
Alleging that the SIT’s inefficiency has been proven time and again, he cited Ojing Taying’s unsolved murder case.
North East Students’ Organisation coordinator Pritam Bhai Sonam expressed solidarity with the victim family and the AEKDSU in their fight for justice of late Toko Yame. “Criminals do not belong to any community. They should be treated like criminals and should not be sympathized”, Sonam said, demanding immediate suspension of police personnel involved in the scuffle.
AEKDSU president, Chakang Yangda warned that if the government fails to address the demand within 15 days, the AEKDSU would impose economic blockade against Tawang district. The AEKDSU president vowed that the union would not back off until justice is delivered.
“We have been crying for justice for the past nine months, but it has yielded no results; instead several officers investigating the matter have been transferred”, claimed AEKDSU general secretary Nera Gumro, who is also chairman of the Toko Yame Justice Movement.
Gumro claimed that the then SIT superintendent of police had told him that though the charge sheet is ready, it is not satisfactory. The union accused the government of influencing the SIT into going soft against the culprits.
Aggrieved father Koya Yame has accused the government of shielding the accused. “My son has been made a poster boy, but since the past nine months, justice is being denied”, said Koya.
“It seems that there is no law in Arunachal Pradesh. We are aware who the culprits are, but I’m surprised that the police is taking so long to nab them”, he said, informing that his son, Toko was a bright and peace-loving student.
In his emotionally overrun speech, Koya said, “Tawang may be paradise for many, but for me it is hell, as my son was a victim of communal hatred”. However, he later clarified that he doesn’t want the issue to be communal and acknowledged the support of many people from Tawang, including the Tawang District Students’ Union at this hour of grief.
The joint rally included representatives of the AAPSU, NESO, Arunachal Law Students Union, All Nyishi Students’ Union, All Aka (Hrusso) Students Union, East Siang District Students’ Union, and the Papum Pare, Kra Daadi, Kurung Kumey and West Kameng district unit students’ unions, Rajiv Gandhi University Students’ Union, Rajiv Gandhi University Research Scholars’ Forum and Sajolang Elite Society.