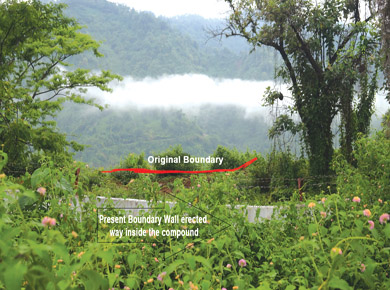 [ Taba Ajum ]
ITANAGAR, Jun 25: The lone central university of the state, the Rajiv Gandhi University (RGU), is battling for survival as the greed of land grabbers and contractors continue to increase.
Day-by-day, the university campus is shrinking caused by encroachment of the land belonging to the RGU. The situation is so alarming that if the trend continues, the university will be left with no land for expansion in the future.
Interestingly, the encroachers include professors and non-teaching staff of RGU, besides some outsiders.
Encroachment has been done at several areas of the campus but the worst affected are the university entrance gate, Kameng hall of residence, new colony and the backside of RGU guest house.
“The RGU authorities are undoubtedly aware of the problem, but choose to remain silent. The construction of boundary wall has been disrupted several times by these land grabbers. Instead of constructing the boundary wall properly, the authorities have buckled under the pressure and have failed to protect the university land,” shared a worried employee of RGU.
Reportedly, the entire problem began when the construction of the boundary wall started in 2017.
“The university remained without a boundary wall till 2017. When the boundary wall erection work started, some individuals started claiming the part of university land, including the existing university colony”, the employee shared, adding that none of the stakeholders, including the AAPSU, Rajiv Gandhi University Teachers’ Association (RGUTA), Rajiv Gandhi University Non-Teaching Employees’ Association, Rajiv Gandhi University Students’ Union (RGUSU), Rajiv Gandhi University Research Scholars’ Forum, Rajiv Gandhi University Alumni Association, Reactor, Chancellor, state government and union government exhibited any sincere intent to save the lone central university of the state.
The RGU was established way back in 1985 at Rono Hills, Doimukh by acquiring 302 acres of land. Then local legislator Techi Takar, along with well wishers of Doimukh area played an important role in setting up the university. The state government paid lump-sum amount of rupees one lakh eighty thousand two hundred for acquiring the land.
“Those days, there was assumption that 302 acres consists of the entire present hill top. However, with the establishment of the Arunachal University, a few families later started settling nearby and started laying claim. It seems that there was a loophole and people at the helm of affairs never took any initiative to correct it. Initially, the innocent local residents respected the importance of the lone central university of the state and did not encroach into the demarcated land, but now things are changing for the worse,”
Further, the poor quality of work has also severely affected the quality of infrastructure at the RGU. The newly constructed buildings are developing cracks, thereby causing serious damage to the infrastructure. The big question is when will the authorities, particularly the state government, wake up and take corrective measures to save the RGU.