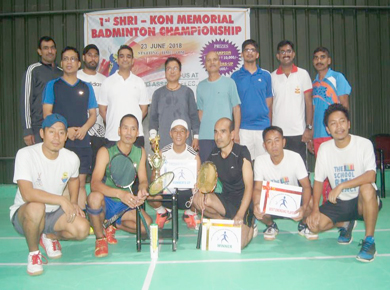 KHONSA, Jun 29: A badminton championship was organized in memory of riflemen Shree Bhagwan and Nanwang S Konyak by the Khonsa battalion of the Assam Rifles at the battalion’s indoor stadium here from 23 to 27 June.
The pair of Chamthak Ralongham and Aboni Phukan won the title, defeating the duo of Tingwang Hosai and Vincent Tongluk in the final to become champion.
Twenty-four shuttlers from the Assam Rifles and civilians participated in the championship.
The prizes to the winners and runners-up were given away by Tirap Deputy Commissioner PN Thungon and the Commandant of Khonsa battalion of the Assam Rifles.
The prizes included championship trophy and cash amounts.
Riflemen Bhagwan and Konyak were killed in an ambush near the Indo-Myanamar border in 2016. (DIPRO)