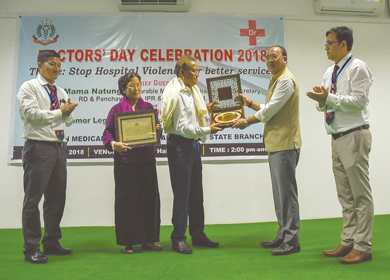 Staff Reporter
ITANAGAR, Jul 1: Joining the rest of the country, Doctors’ Day was celebrated with the theme ‘Stop hospital violence for better service’ at Banquet Hall here on Sunday.
The celebration was organised by the Indian Medical Association Arunachal Pradesh Branch (IMA-AP). The day is celebrated in India on 1 July to honour the legendary physician and second chief minister of West Bengal, Dr Bidhan Chandra Roy. He was born on 1 July, 1882, and died on the same date in 1962, aged 80 years.
Attending the celebration, RD Parliamentary Secretary Mama Natung urged the doctors to serve the needy people in the rural areas of the state.
“The Naharlagun and Pasighat hospitals are having surplus numbers of doctors. However, in far-flung areas, many primary health centres do not have doctors. Doctors should serve the needy people in the rural areas,” Natung said.
He also said doctors should not turn down their transfer and posting orders but rather go to serve the people wherever the government sends them.
“Transfer and posting of doctors has been a major issue for the health department,” he said.
Natung urged all the stakeholders of the state, “including doctors, right from Longding to Tawang,” to shoulder equal responsibility to make Arunachal a greater state in terms of development.
“The chief minister and the ministers alone cannot make Arunachal great; every individual, including doctors, has to put in their efforts,” he said.
Congratulating the doctors on the occasion, Natung said, “Doctors are living gods. Patients find the same peace and compassion while visiting doctors that worshipers feel after visiting temples.”
Health Services Director Dr Moromer Lego in his address urged the doctors to seek to excel in their profession.
“A good doctor cures the disease, but a great doctor cures a man and the society,” he said.
Remarking on the theme of the celebration, Dr Lego said, “Disruptive behaviour among doctors undermines the medical profession.”
Swami Pitambarananda of RK Mission termed the day “a day of introspection for all doctors,” and advised them to look at themselves analytically and critically.
He expressed concern over the growing number of “commercial doctors who prescribe medicines for patients unnecessarily,” and said doctors are in a noble profession and should avoid unwise practices for short-term gains.
IMA-AP president Dr Lobsang Tsetim said the day is dedicated to “the men in white apron and stethoscope.”
He expressed concern over repeated attacks on healthcare professionals and violence against clinical establishments, and said, “When fear lurks in the workplace, the doctors are bound to be defensive.”
IMA-AP secretary Jego Ori made a presentation on the activities of the IMA-AP over the years.
As part of the celebration, retired SMO Dr N Das was felicitated with the IMA Lifetime Achievement Award.
Dr Das did his MBBS from Guwahati Medical College in 1981, and was first posted in Arunachal Pradesh in 1984 at Nacho in Upper Subansiri district.
The IMA state unit also felicitated the Donyi Polo Mission School for the Hearing Impaired and guest faculty member Dr Chandra Shekar B Nair, who is the director of Goa-based Molbio Diagnostic Pvt Ltd.