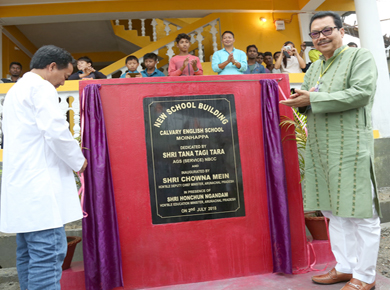 MOINHAPPA, Jul 2: Deputy Chief Minister Chowna Mein informed that the chief minister has sought analyses from the deputy commissioners regarding the poor performance of the government schools in this year’s CBSE examinations “to find out the reasons behind it and for a way-forward solution.”
Mein raised concern over the low pass percentage in the CBSE examinations and said “mass awareness is essential in this regard to improve the education system.”
Attending the inauguration of the new school building of Calvary English School (CES) in the presence of Education Minister Honchun Ngandam here on Monday, the DCM urged the teachers not to take their profession casually.
Referring to the earlier days when there was 20:80 ratio in the recruitment rules and the schools were manned by outsiders, he opined that the education system was comparatively better then.
“Today, despite our own local teachers manning the majority of the schools since the introduction of the 80:20 ratio in the recruitment rules, and despite schools having been established in every nook and corner, it is a matter of grave concern that our results are deteriorating,” he said.
The new school building was constructed with funding from the state government. Chief Minister Pema Khandu had assured to provide the fund when he had attended the school’s silver jubilee celebration in October last year.
Addressing the gathering during the parents meet, Mein lauded the Nyishi Baptist Church Council of Arunachal Pradesh for running schools with nominal fees for the students belonging to poor backgrounds. He also lauded the contribution made by the Rama Krishna Mission, the Vivekananda Mission and the Christian missionaries in the education and health sectors in the state.
He said the government would extend all possible help to such charitable societies and organizations, irrespective of their religious background.
“Our government is a secular one and we believe that all must grow equally and parallel,” he said.
Replying to a memorandum submitted by the school’s principal, Mein assured to look into the request for a multipurpose hall for the school.
Ngandam also said the government would support every organization that is working towards educating the state’s children.
He said that the government will release grant-in-aid to the Arunachal Baptist Church Council, “as announced by the chief minister last year,” once the MoU is signed with the ABCC, “as has been done with the Ramakrishna and Vivekananda Missions.”
He urged people to “accept positive change but avoid and ignore any negative message that tries to send wrong signal about the present government that it is against Christianity.”
He said, “India is a secular state and it respects and allows its citizens to follow any religion.”
Speaking on the much-debated Arunachal Pradesh Freedom of Religion Act, Ngandam said the act was never activated nor brought into enforcement in the state, “and it will be discussed meticulously.”
Replying to a memorandum from the school’s principal, seeking a 50-bedded girls’ hostel for the school, Ngandam assured to look into the request in the next financial year, “if not this year.”
CES Principal Lingto Gollo presented the school’s annual report.
Calgary English School was established in 1992, and is one of the schools run by the Nyishi Baptist Church Council with contributions from well-wishers and without any government aid – until the recent assistance provided by the Pema Khandu government.
The school received its affiliation to the CBSE last year, and 29 students are enrolled in Class 10 for the 2018-19 session. It has a total of 300 students from poor backgrounds. (PRO)