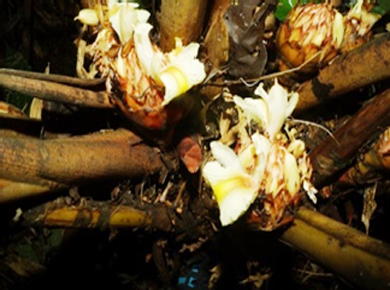 [ Nivedita Khandekar ]
NEW DELHI, Jul 4: Ginger not only adds some spice to Indian food but is also an important medicinal plant. Now, a team of researchers from Kerala has discovered two new species of ginger in the biodiversity hotspot of the Northeast.
The new species have been found in Arunachal Pradesh. One of them, named Amomumnim-keyense (Zingiberaceae), was found in Lohit district, while the other named Amomumriwatchii (Zingiberaceae) in the neighbouring Dibang Valley district.
The first has been named to pay respect to a sacred abode of a spirit invoked by the Mishmi community of Lohit district, and the second to acknowledge the work by an organisation in the field of biodiversity conservation in Dibang Valley district – Research Institution of World Ancient, Traditional, Culture and Heritage (RIWATCH).
“It was an accidental discovery. We were going around in the wild forest near this Tidding area (in Lohit district) scouting. So far, this species was not found anywhere else. Locals too are not using it,” lead researcher Mamiyil Sabu from the department of Botany, University of Calicut at Kerala told India Science Wire.
“This species is restricted to a very small area. It is vulnerable to damage due to landslides etc”, Sabu added.
RIWATCH executive director Vijay Anna Swami said, “Nimke is the sacred place between Tiding and Parshuram Kund on the banks of the Lohit River. It is the place of resting of the spirit invoked by nature worshipping Miju Mishmi community at the start of their rituals.”
In India, Amomum – an herb of the ginger family – is represented by 22 species distributed in North-East India, Southern Peninsular India and the Andaman and Nicobar Islands with the major centre of distribution in North-East India.
“Amomum nimkeyense is similar to A. subulatum, but differs from the latter by having ovate to linear-obovate leaf lamina with equal base, the abaxial surface densely pubescent, a 8?9 mm long pubescent ligule, inflorescence bracts reddish towards the base and golden brown at the middle, and bracteoles pale yellowish brown with a median red band, a white-pink tinged calyx, pubescent corolla tube, obovate labellum lacking lateral staminodes, a glabrous ovary and a capsule with small wings towards the apex,” researchers said, while describing the taxonomy of the new find in their research paper published in the journal, Phytotaxa.
The habitat and ecology for Amomum nimkeyense is known only from Tidding area in the Lohit river valley, on the way to Hayuliang from Tezu in Lohit district. The plants grow in the moist sloping areas in association with other shrubs.
“As the occurrence of this new taxon is found in highly restricted 1-2 sq km area, the species is likely to fall within a category of threat. Probable threat to its existence in this locality due to natural calamities and other developmental activities may lead to loss of its natural habitat. Thus, based on the present knowledge and available data, conservation status is assessed as data deficient,” the researchers said.
Amomumriwatchii was found in Lower Dibang Valley district, 42-km away from Roing, district headquarters, towards Mayodia Pass. “Amomumriwatchii is similar to A. carnosum, but differs from the latter in having non-stoloniferous rhizome, oblong lanceolate lamina, 5-6 mm long ligule with entire apex, broadly ovate or orbicular dark red thick outer bract, calyx lobes with cuspidate or horned apex, oblong labellum with entire apex and non-winged capsule,” researchers said in their paper published in the journal, Botany Letters.
These ginger plants were found growing along the margins of temperate evergreen forest in association with bamboo and other shrubs at an altitude range from 2100 to 2560 meters.”
We could not identify any serious threat on the new species, but the population might be impacted by road broadening. Based on the available data, the conservation status is assessed as data deficient,” the paper said.
But why ginger?
“There is lot of potential for commercial or medicinal use of gingers. This is one of the most economically important food item and a familiar herb across India, but nobody has worked on this. It is food, medicine, and also has ornamental value, but for almost 125 years, there has been no major study on gingers,” said Sabu.
Sabu has been exploring north east India since 2000.He has published papers in several international journals about Amomum from Arunachal Pradesh and Andaman & Nicobar Islands (ginger and wild bananas). It was in 1892 that British scientist J D Hooker had done an extensive taxonomical study of various species in India. Since then, few have worked on gingers. That intrigued Sabu, who has been working on taxonomy of Indian zingiberaceae.
His research includes field visits, exploring wild forest areas, documenting what is the best suited climate for its growth, other favourable conditions, study of pollen grains, anatomical study, morphology, and microscopic molecular study (in research lab), among many other small and big things, he said.
Sabu’s team included Vadakoot Sankaran Hareesh, his colleague from University of Calicut; Tatum Mibang from Department of Botany, Jawaharlal Nehru College, Pasighat, Arunachal Pradesh and Arup Kumar Das from Department of Botany, Rajiv Gandhi University, Itanagar. RIWATCH facilitated the field work.
One of the associates Sathyanarayanan Mundayoor was instrumental in suggesting the name Nimke for the ginger species found near Tidding in Lohit district. The research was funded by the Department of Science and Technology (DST). (India Science Wire)