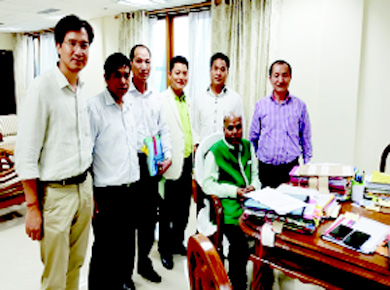 ITANAGAR, Jul 8: The Arunachal Pradesh Engineering Service Association (APESA) informed Chief Secretary Satya Gopal that not a single sitting of the Departmental Promotion Committee (DPC) has taken place in the last many years.
During a meeting with the chief secretary recently, members of the APESA said various memoranda were issued by the chief secretary’s office to hold the DPC meeting from time to time – or twice in a year – to fill the vacancies in various levels of promotional posts in all the departments.
The APESA said none of the works departments has had a single sitting of DPC meeting in several years, resulting in placement of many officers at various levels in the name of functional posts.
The association citied instances of junior officers of the cadre of junior engineers posted as functional assistant engineers, superseding senior officers, and of junior officers of the cadre of assistant engineers posted as functional executive engineers, superseding senior officers.
It said the state of affairs has resulted in many senior officers working under junior officers as their subordinates, which it said has given rise to “embarrassing situations for the senior officers.
“Due to non-conduct of DPC meeting on time and in regular intervals, the aforesaid irregular filling of the vacant posts are being practiced in most of the works departments,” the APESA said, adding that such lapse is against public interest and deprives deserving senior officers of their rights.
“The injustice perpetrated on them has resulted in lack of work culture and professional discipline in the engineering fraternity, which is against the extant of the service rules,” the APESA said.
The association requested the chief secretary’s office to issue specific direction to all the commissioners or secretaries of the engineering departments to conduct the DPC meeting within three months, latest by
September 2018, to “arrest the menace of functional postings of junior officers superseding the senior officers or out-of-turn promotion on officiating or ad-hoc promotion.”
The association said timely conduct of DPC meeting would motivate the officers, help improve work culture in the departments, bring back professional discipline in the works departments, and result in speedy and better delivery of public service.