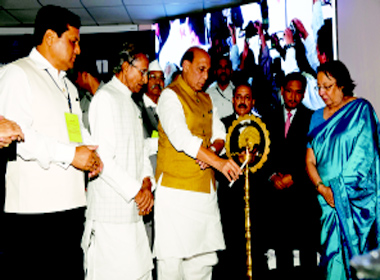 SHILLONG (Meghalaya), Jul 9: Union Home Minister Rajnath Singh has asked the Northeastern states to expedite work on long-pending projects of the North Eastern Council (NEC) and ensure maximum utilization of funds.
Addressing the 67th plenary session of the NEC here, Singh said the NEC and the eight NE states would have to make sure that all the ongoing projects are completed in a time-bound manner.
He urged the states to ensure effective implementation of the recently approved financial package of Rs 4,500 crore by the Centre, and directed them to focus on specific areas and better convergence of the government schemes.
Underlining the importance of civil society participation in developmental process, the home minister advocated social audit of the projects and use of modern technology to effectively monitor project implementation.
“In the Northeastern region, civil society is very powerful medium to be engaged in all our development efforts. The participation of the civil society is crucial. They should be the partners in socioeconomic change. One such partnership can be through social audit,” said Singh in his first address to NEC after the union cabinet’s recent approval of a proposal making him chairman of the NEC.
“Social audit not only provides information on how funds are spent but most crucially it enables people’s participation in the planning of developmental activities and also enables mid-course correction as projects and schemes roll on,” he said.
He expressed happiness that through the use of remote sensing and satellite imagery, the NEC has partnered with the North Eastern Space Application Centre (NESAC) and developed a ‘projects monitoring portal’ and a mobile application where stakeholders can monitor the progress of capital works funded by the NEC.
Regarding the security scenario in the Northeastern states, the home minister said the government is giving special attention to improving the internal security.
“Private investment and economic activity would not flourish in the absence of peace and normalcy. During four years of NDA government the security situation has drastically improved. When compared to the 90s, the insurgency related incidents have declined 85 percent. There is 96 percent reduction in civilian and security forces casualties,” he said.
Underlining the need for a critical analysis and revision of strategy for development in the region, the minister called for drawing “a short-term, medium-term and long-term roadmap.”
Singh said there have been a number of reports and vision documents on how to develop the NE region. He emphasized on the need of taking stock of the progress made in implementing recommendations contained in the vision documents and taking expeditious steps further.
The home minister said the government had set up the NITI Forum for the North East in order to provide a platform to identify various constraints on the way of accelerated, inclusive and sustainable economic growth in the region.
The first round of the discussion of the forum was held on 10 April. The suggestions of the forum have been made available to all the departments concerned for examination and consideration. Singh has given 31 October, 2018 as the timeline for a decision on suggestions made by the forum.
Singh also urged the NER state governments to create conducive environment for investment, “so that entrepreneurs take this opportunity to set up industrial units and generate the much needed employment in the region.”
Stating that the DoNER ministry recently launched the North East Venture Capital Fund through the North Eastern Development Finance Corporation Limited (NEDFi) with a corpus of Rs 100 crore, he exhorted the entrepreneurs of the region to access funds to take up economic activities in the field of tourism, waste management, medical healthcare, handloom and handicrafts, agro products, etc.
“The union cabinet, in March 2018, approved the North East Industrial Development Scheme (NEIDS), 2017, with an outlay of Rs 3,000 crore up to March, 2020. Government will provide necessary allocations for the scheme after assessment before March, 2020,” he said.
He expressed hope that the scheme would promote industrialization in the NER to boost employment and income generation.
The home minister lauded the NEC for leveraging its community-based project, the North Eastern Region Community Resource Management Project (NERCORMP), to design sustainable livelihoods interventions and for improving the life of a lot of rural households in the NER.
“Strong community base is the strength of this region. NERCORMP can serve as a centre of excellence for livelihoods. It can coordinate with various ministries of the central government and engage with state governments, district administrations and non-government bodies for improving grassroots planning in the backward areas of the region, and for facilitating exchange of ideas and dissemination of the best practices of various livelihood programs for wider application,” he said.
In view of the peculiar geographical terrain of the NER and fragmented farmland holdings, the union home minister called for “high-value low-volume” produce for export and “out-of-the-box” solutions to doubling farmers’ income by 2022.
He also said that the NEC could become a spring board for regional integration and prosperity with South East Asia towards realizing the objectives of the government’s Act East Policy.