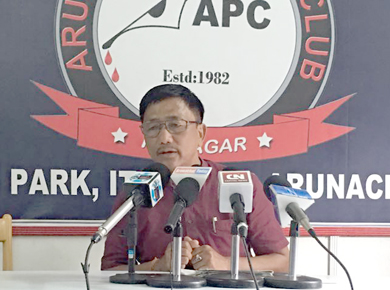 Staff Reporter
ITANAGAR, Jul 10: Food & Civil Supplies Parliamentary Secretary Tage Taki affirmed that he had no involvement in the Trans-Arunachal Highway (TAH) compensation issue in Lower Subansiri district, and squarely blamed former deputy commissioner Kemo Lollen for the multi-crore scam.
The PS said this in reaction to the allegation of the Arunachal Pradesh Congress Committee’s (APCC) assessment committee regarding the involvement of Taki, and MLAs Likha Saaya and Tamar Murtem in the scam.
Addressing reporters at the press club here, Taki said he would resign from his post if he is found to be involved in the matter. Giving an ultimatum of 10 days, he also said that if he is not found guilty of the accusation, the APCC’s assessment committee, along with its chairman Tamchi Tahar and other individuals of the team would have to apologize or face defamation charges.
Taki claimed that he, Saaya and Murtem had made repeated enquiries regarding compensation problems, if any, to the then Lower Subansiri deputy commissioner Kemo Lollen.
“The DC said that there was no requirement at the time, and did not reveal the compensation system,” he said.
When the compensation issues began in Bopi area, Taki said, he went to the DC again and enquired whether the administration required any support, like security and such, to which the DC reportedly said that compensation would be first paid to those without any issues, and that the assistance of the three MLAs would be sought later for the areas where there were issues.
“We waited for two months, and we went again, but the DC repeated the same that the MLAs would be notified, and he kept pushing us back for nearly seven months before we found about these discrepancies,” Taki claimed.
“The entire game was played by the DC and he has rightly been arrested,” he said.
The PS refrained from making any comment about businessman Likha Maj, saying only that Maj was a landowner “and the officials are the ones who should be first held responsible.”
Taki claimed that they received reports of anomalies in the TAH compensation payment in the month of May, following which, he said, he and Saaya went to Delhi to meet Chief Minister Pema Khandu (who was there at the time) and sought Lollen’s transfer.
“On the very night, the order was issued and the DC was changed,” Taki said.
He said he and Saaya returned the next day and held a meeting with the chief secretary and instructed newly appointed Lower Subansiri Deputy Commissioner Chuku Takar to seize all the bank operations and documents related to the TAH project and asked the chief secretary to constitute a reassessment team.
The chief minister and the deputy chief minister also took immediate action and constituted a team, headed by the land management secretary and the home commissioner.
Taki said all the seized documents were sealed and brought to Itanagar.
Reformation of the assessment team was done and assessment of the Joram-Koloriang stretch of the project was conducted first as the stretch was shorter (20-50 km), so that any instance of mishandling could be identified sooner.
The team said that the Potin-Bopi stretch would be investigated next.
“The APCC suddenly woke up from its slumber and realized that there have been gross irregularities, and are now seeking government action when the government is already on the job and has initiated action much before they (APCC) even sought it. The APCC should have instead supported the action taken and appealed to the government for speeding up the investigation,” Taki said.
To the suggestion that he received benefits from the TAH compensation, Taki clarified that he only recently found out that there is a bill worth Rs 22,000 in his name, for a culvert in Industry Line, on the Potin-Bopi road.
“Other than that, there are no bills in the name of my wife, children, or siblings. A few relatives have bills in their names, but many of them have rejected those bills as well,” Taki claimed.
He welcomed the investigation by the Special Investigation Cell and called for speeding up the process.
“Site clearance is required for the work to begin, for which the compensation issue needs to be resolved,” he said.
Taki also urged the state government to initiate investigation into the Potin-Bopi TAH stretch (149 km) as soon as the investigation into the Joram-Koloriang stretch is complete.
“If the case does not head in the right manner, I shall also seek a CBI inquiry,” he added.