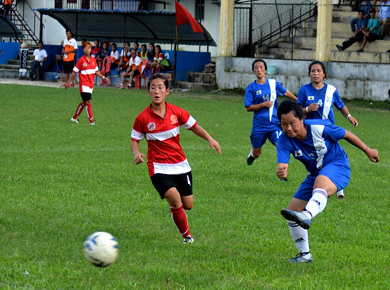 NAHARLAGUN, Jul 12: Arunachal SC (ASC) defeated Upper Subansiri DFA (USDFA) 6-1 in their last match of group stage and stormed into the semifinals as Pool B winners.
Despite its loss to ASC, USDFA qualified for the semis as group runner-up from Pool B.
It was USDFA which opened the score through Binde Maying within a minute of play, but ASC came back strong and Giani Ramching’s hat-trick helped them secure a 3-1 lead till the end of the first half.
The second half was thoroughly dominated by ASC and goals from Tumpi Koyu, Kai Rumi and Yaram Takam helped their team to qualify for the semis.
In the second match of the day, Deed Circle FC (DCFC) needed a win by at least a 3-0 margin against All Hija Sports Association (AHSA) in order to qualify for the semis. DCFC started the game very strong from the first half and took the lead in the first half through Golo Yarang.
Yarang completed her first hat-trick of the tournament in the second half, and provided her team the needed score line to qualify for the semis, until Kago Assung of AHSA crushed their dreams by scoring in the 66th minute.
The match ended 3-1, which was not enough for DCFC to advance into the semis.
The last match of the group stages will be played on Friday between Kamle DFA and FC Doimukh at 3:30 pm.