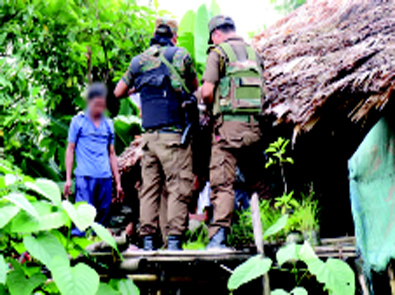 [ Tongam Rina ]
ITANAGAR, Jul 15: Senua Noksa village in Longding district witnessed the killing of two members of the NSCN (IM) by Indian security forces on 11 July, even though the government of India signed a framework agreement on 3 August 2015 with the NSCN (IM) to find a lasting solution to the Naga issue. 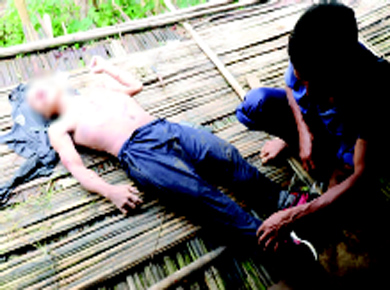 The two NSCN (IM) operatives have been identified as Tenwang Wangsa of Senua Noksa and Acham Wangsu of Longphong village in Longding district.
Several individuals and heads of organizations from the district this daily spoke to says that the operatives were unarmed. While the defence PRO had said that the security forces came under fire from an isolated hut, the NSCN (IM) and sources that this daily spoke to say that the house where the two men were killed belonged to the deputy chief of the village.
Security forces say that it was an encounter, and that the men were taking shelter in the village and opened fire when the army approached.
“The deceased were active IM members and were involved in many recent extortions. An AK-47 along with a pistol was recovered from the two,” said an official source, adding that one jawan was hit by a bullet but he survived as he was wearing a bulletproof jacket.
Civil functionaries of the GPRN normally don’t wear camouflage and are unarmed, except for the higher functionaries who are entitled to small arms for protection, says the NSCN (IM), dismissing the claims of the security forces.
K.Chawang, Convener, Ceasefire Monitoring Cell said that the claims of the Assam Rifles were baseless.
A person who knew Tenwang Wangsa said that Wangsa studied in one of the reputed schools in the state and was very well conversant in English and Hindi.
“He had a bright future ahead of him but he joined the NSCN (IM) because of humiliation meted out to his family members by security forces. His father was repeatedly picked up and assaulted by the security forces, which forced Tenwang to join the NSCN (IM),” the person, who requested anonymity, informed this daily.
“The people of Longding are caught between the security forces and Naga armed groups,” he said.
“They are our boys, therefore the security forces harass us,” said another.
Following the latest killings, the NSCN in a statement said, “The NSCN in its sincere quest for peace has instead become a victim of the Cease Fire. The NSCN has lost more members during the Cease Fire period beginning from August 1997 till date when compared to the number of casualties during the non-Cease Fire period. Is this the price the Nagas have to pay for demanding peace and unity from the GoI? The Nagas showing more maturity than the Indians has remain patient for too long like a sitting duck while the Indian Army personnel continues to run amok… in total disregard to the ongoing Indo-Naga peace process.
“Despite the Cease Fire Ground Rules Review Committee meeting of the NSCN and GoI on June 8, 2018 at Chumukedima, the Indian Army continues to play the spoilsport,” it said, adding that the Assam Rifles was trying to “destroy the peace process initiated by the government of India and face the worst consequences.”
The NSCN (IM) further stated that the ceasefire between the NSCN and the GoI is without territorial limit.
The Wancho Students’ Union, along with the Wancho Culture Society and the Wancho Council has strongly condemned the killings. They said that two were unarmed NSCN (IM) operatives.
In a joint statement, the organizations said Assam Rifles jawans under the command of its Wakka-based post commander kept up their gunfire the whole night in the village, “thereby terrorizing the innocent villagers.
“Such incident of gruesome killing and violation of human rights may aggravate the situation and disturb the peace and development of the district,” they said.
The organizations said as the government of India is taking initiatives for a peaceful solution to the longstanding Naga issues, “peace should be maintained at this stage of political negotiations.”
The All Changlang District Students’ Union has also condemned the killings.
Stating that such inhumane act by the Indian army was intolerable, “especially at a time when the Naga peace deal between the Centre and the NSCN (IM) is at the final stage,” the ACDSU sought the intervention of the defence minister, the state government, and the Assam Rifles’ director general to immediately stop such acts of brutality by the army.

According to records available with this daily, since January 2018, the security forces have carried out several operations against various NSCN groups operating in Tirap, Longding and Changlang (TLC) districts, and against ULFA (I) the Paresh Baruah-led faction, active along the Assam-Arunachal border.
The highest number of operations has been against the NSCN (IM), which has resulted in deaths, injuries, and destruction of hideouts.
In May, security forces killed NSCN (IM) operative Pangang Gangsa near Nignu village in Longding district. The Nagaland-based defence spokesperson said that Gangsa, when he had been with the NSCN (K) earlier, had reportedly been involved in killing of two security personnel in Nignu in December 2016.
While defence sources said Gangsa was killed in retaliatory fire, the NSCN (IM) denied the claim, saying he was killed right in front of his wife.
The security forces claimed to have destroyed hideouts consisting of ten huts near Sonking on 23 March, and that a logistics base and three camps were destroyed in Motongsa in Changlang on 4 July.
Of the four operations carried out by the security forces in early July, three were against the NSCN (IM), including the one on 11 July which claimed two lives.
Apart from ‘encounters’ with the security forces, the Naga organizations – NSCN (IM), NSCN (K), NSCN (U), NSCN (R) – have been involved in turf wars in the state.
On 31 May, three persons were killed while one suffered injury in a fierce gun battle between operatives of the NSCN (IM) and the NSCN (U) which took place in an area between Namsang and Sipini villages in Deomali circle of Tirap district.
Meanwhile, the spate of operations against the NCSN groups, particularly against the IM, by the security forces in Arunachal have left the people wondering about the fate of the ‘framework agreement’ signed between the Narendra Modi-led BJP government and the NSCN (IM) in 2015.
“Today, we mark not merely the end of a problem, but the beginning of a new future.
We will not only try to heal wounds and resolve problems, but also be your partner as you restore your pride and prestige,” the prime minister had said in his address after signing the agreement with the Naga leaders.
The framework agreement, which was touted as an agreement to pave way for a final and lasting solution to the Indo-Naga issue, is yet to be finalized or even made public. In the meantime, the three districts of Arunachal Pradesh remain caught between various Naga organizations and the Indian security forces.