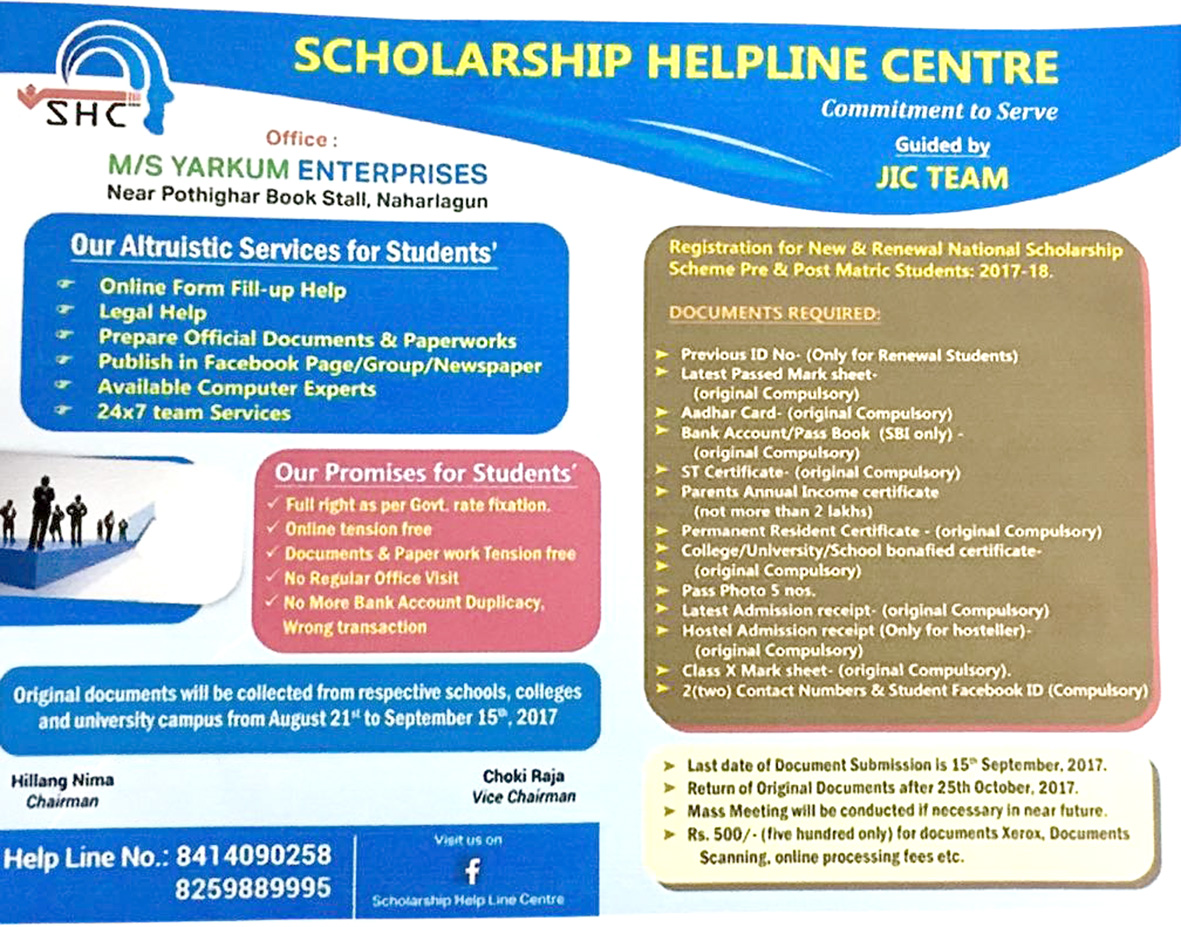 [ Nellie N Manpoong ]
ITANAGAR, Jul 24: In view of the delay in arresting accused Hillang Nima and Choki Raja for duping hundreds of students under the ‘umbrella scheme of pre- and post-matric scholarships’, the affected students have written to the social justice & empowerment and tribal affairs (SJETA) commissioner and the capital complex superintendent of police, seeking their immediate intervention in expediting the case.
Speaking to The Arunachal Times, the students said there has been no major headway in the case even as the date of releasing the scholarship is nearing (30 July), and demanded that the police arrest Nima and Raja within the next 72 hours, saying they (the students) would otherwise resort to staging “peaceful protest” against the police and the authorities concerned.
Reportedly, 1861 students had applied for scholarships through M/s Yarkum Enterprise, the agency of which Nima is the chairman and Raja the vice-chairman. Around 200 others applied without receipts, informed the students.
Saying that Nima and Raja have copies of all their important documents (bank, Aadhar, voter’s card, etc), the students said they would hold Nima and Raja, as well as the police department, responsible if the documents are misused in any way.
Appealing to the police to find the actual persons responsible for the scam, the students in their representation said whoever is found guilty would have to compensate the students “with not only the application fee of Rs 500 but the scholarship amount as well.”
They said Nima had claimed that he had submitted the documents on time, but that the office of the SJETA said there were about 3000 applications that came after the submission date of 30 November, 2017, because of which they were rejected.
The students expressed apprehension that if the police do not arrest the accused before the release of the scholarships, they would be left in the lurch and lose a year’s scholarship amount.
The minimum annual scholarship amount a postgraduate group 1 student receives is Rs 55,000, while a postgraduate group 2 student receives a minimum amount of Rs 45,000. Those pursuing their masters or postgraduate diploma course (Group 3) receive Rs 20,000, while bachelor degree course students receive a minimum amount of Rs 17,000. School students and distance course students receive a minimum of Rs 9,800 to Rs 13,000 per annum.
Superintendent of Police M Harsha Vardhan informed this daily that the accused are currently absconding, but assured that the police are making all-out efforts to arrest the duo.
“We have questioned their families and friends repeatedly, alerted the Palin police station officer-in-charge, and followed up as well. We have also moved to obtain a non-bailable warrant,” the SP said.
The investigating officer informed that the duo has applied for anticipatory bail but the police are trying to cancel it.
SJETA Commissioner Gamli Padu said it was upon the police to investigate the case as the department does not have an agency for issuing scholarship forms. He, however, assured that if any anomaly is found within the department, appropriate action would be taken.
It is worth noting that Nima and Choki held counselling sessions across various government secondary and higher secondary schools in the capital complex with the full knowledge of the principals and headmasters of the schools.
As of now, the students are seeking a meeting with Governor BD Mishra and Chief Minister Pema Khandu in hopes that the grievances of the currently 1861 identified students would be looked into seriously.
On 14 July, hundreds of students had lodged a complaint at the Naharlagun police station against M/s Yarkum Enterprises and its chairman Nima and vice-chairman Choki Raja for allegedly acquiring fee of Rs 500 from each of the students for submitting forms under the ‘umbrella scheme of pre- and post-matric scholarships’.