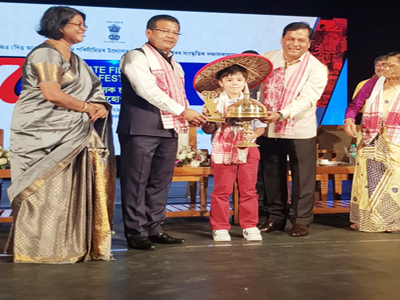 GUWAHATI (Assam), Jul 30: Child actor Matin Rey Tangu, who was seen alongside Bollywood actor Salman Khan in the movie ‘Tubelight’, was felicitated by Chief Minister Sarbananda Sonowal during the 7th Assam State Film Awards & Film Festival, held at Srimanta Sankardeva International Auditorium here on Sunday.
Matin, who hails from Arunachal Pradesh, was the only one to be felicitated from outside the state of Assam during the event organized by Assam State (Finance & Development) Corporation Ltd, under the aegis of the Assam government.
Besides screening of award winning Assamese films, several leading film personalities of Assam were felicitated on the occasion for their contributions to Assamese films as well as Indian and international cinemas.
Sonowal praised Matin for “making Northeast India proud as a child actor in mainstream Indian cinema.”
Matin thanked the organizers, the Assam government, and the CM for inviting him to the prestigious occasion and felicitating him.
Noted Bollywood actors and directors like Prakash Jha, Amol Palekar, Adil Hussain, Jahnu Barua and Seema Biswas were also among the attendees.