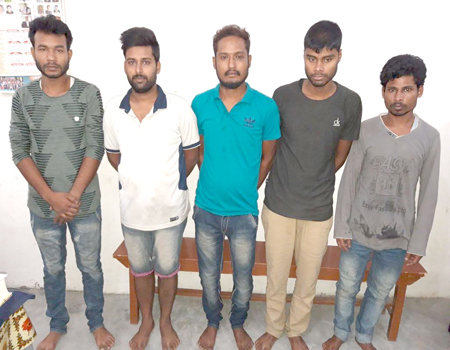 ITANAGAR, Jul 4: Five habitual car lifters were arrested by the Naharlagun unit police last week, informed the police on Saturday.
The accused have been identified as Amar Ali, Mijanur Rehman, Shajahan Ali, Tilu Barman and Dilip Sarkar.
“The arrests were made following a tip-off from reliable sources about the presence of car lifters in the capital complex area,” informed Itanagar SDPO Kamdam Sikom.
During interrogation, the accused revealed that they are habitual vehicle lifters, having earlier stolen three Tata Sumos and one Maruti Gypsy from Naharlagun and Nirjuli areas, which they later sold off in Assam.
Reportedly, they received anywhere between Rs 1 lakh and Rs 1.5 lakh for each vehicle from buyers.
Following the revelation, one Tata Sumo was recovered, and more vehicles are likely to be recovered soon, informed the SDPO.
During investigation, it emerged that the lifters are also accused in three other cases registered at the Naharlagun police station.
Investigation is on to nab more accused involved in the case.
The police team that nabbed the car lifters included Naharlagun police station OC Nikom Riba and investigating officer Inspector Thumgon Tali, led by SDPO Sikom (who is currently also in charge of the Naharlagun police station), under the close supervision of Capital SP M Harsha Vardhan.
The SP has meanwhile appealed to the people to keep strict vigil in their respective sectors and colonies, cooperate with the police in nabbing criminals, and help in maintaining peace and tranquility.