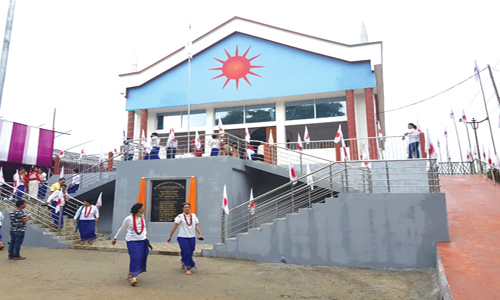 Staff Reporter
ITANAGAR, Aug 12: Chief Minister Pema Khandu reassured the indigenous faith believers of the state that the government would consult members of all religious groups in the state before any action is initiated on the fate of the Arunachal Pradesh Freedom of Religion (APFR) Act, 1978.
Speaking at the inaugural programme of the Nyishi Indigenous Art and Cultural Hall here on Sunday, the chief minister said the indigenous faith followers should not be disheartened, and assured that extensive discussions would be held with members of various religious groups, including Christians, Hindus, Buddhists, etc, and only then a decision would be taken.
Pema said he had made the statement about repealing the APFR Act during an event in Banderdewa after he had received representations from some religious organizations seeking its repeal.
On the uproar it created soon after, he said, “The chief minister’s statement is only a statement. Ultimately, it is the assembly that decides whether something has to be passed or not.”
“Initiated by then chief minister PK Thungon to protect the indigenous people, the APFR Act is nearly 40 years old. Unfortunately, after passing the act, subsequent governments could not enforce it as the specified rules are missing from it,” Pema said, adding that it is his responsibility to “take all religious groups together and hold serious discussions on it.”
“Since the act does not speak for or against any religion, we have to continue to maintain equilibrium, and the government will keep the sentiments of all religions in consideration,” he said.
He requested members of different religious organizations to respect one another.
The CM appreciated the Indigenous Faith and Cultural Society of Arunachal Pradesh (IFCSAP) for taking the indigenous movement forward and keeping indigenous practices alive.
He encouraged parents to teach their children traditional values, and called on the youth to take these teachings in the right direction.
Pema also paid tribute and offered respect to former chief minister, late Kalikho Pul, for his contribution for the construction of the art and cultural hall.
He also assured full support of the government for further construction of the Nyishi archives-cum-community hall in the academic block of the Nyedar Namlo premises here. He also assured to provide funds for construction of RCC protection walls for the protection of the building premises from landslides.
He said the government is taking all necessary steps in supporting the community for preservation of languages by implementing local tribal languages as third language in government schools.
He said government is always ready to support community-based organizations in their efforts in language preservation.
Earlier, Nyishi Indigenous Faith and Cultural Society (NIFCS) president Pai Dawe, who had also requested the CM to reconsider the repeal of the APFR Act, presented a brief on the importance of following the footsteps of the ancestors and maintaining traditional values.
Highlighting how culture and faith are closely related, Dawe said a change in faith could cause changes in culture as well, and requested everyone to continue the indigenous movement with zeal.
Earlier, Hayuliang MLA Dasanglu Pul in her speech thanked the NIFCS for remembering the contributions of late Pul towards the construction of the art and cultural hall, and for making her a part of the inaugural function.
The chief minister handed over a memento and a letter of appreciation to Dr Biman Natung for donating the land for the hall.
Earlier, the chief minister inaugurated the Nyishi Indigenous Art and Cultural Hall, the 100 kva distribution transformer substation, and the high-mast light at the Nyedar Namlo.
Indigenous Affairs Minister Nabam Rebia and Itanagar MLA Techi Kaso also spoke.