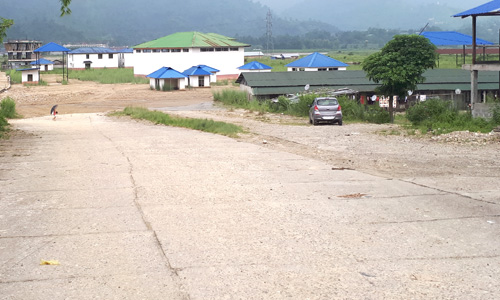 Staff Reporter
NAHARLAGUN, Aug 12: The much awaited interstate truck terminal (ISTT) project at Lekhi village here is yet to see the light of day.
Work on the project started way back in 2010, and the majority of the structure was completed by 2012. However, the work has not been completely finished, reportedly over funding issues.
Due to the negligence of the state government, some of the structures constructed earlier have been badly damaged. The abandoned building has become a favourite place for stray animals to take shelter.
In August 2017, while inaugurating the interstate bus terminal here, Chief Minister Pema Khandu had announced that the truck terminal would be ready by September that year. However, almost a year has passed but nothing has changed on the ground.
Speaking to this daily, the land donor for the ISTT, Techi Joseph, appealed to the state government to immediately complete the truck terminal in the greater interest of the state. He informed that his family donated a vast stretch of land free of cost for the construction of the ISTT in hopes that it would help to decongest the capital’s road.
“I donated 32,175,83 sq mtrs of land initially, and later additional land was also donated for the double-lane approach road to the ISTT. But sadly, the project is yet to be completed. Chief Minister Pema Khandu made it clear on several occasions that his government would finish all major pending infrastructure projects. Therefore I appeal to him to complete the ISTT project at the earliest,” said Joseph.
The residents of the area also alleged that there is no watchman/chowkidar to take care of the ISTT infrastructure, because of which several glass panels, doors and windows on it have been damaged. While several small rooms on the ground floor are filled with water, the parking area is filled with mud, and the whole area looks unhygienic.
When contacted, Chief Engineer Urban Development Department  Taba Tedir said the work was stopped due to several issues but the government is determined to complete it this year. He said fund for the project has been earmarked and was reflected in the budget speech of Deputy Chief Minister Chowna Mein.
Tedir expressed hope that if the fund is released at the earliest, the ISTT would be completed latest by December 2018 and would be made functional thereafter.
“We are working to find an immediate solution, so that the project is completed soon,” said Tedir. He also appealed to the denizens of the capital complex to protect and preserve the public asset.
Meanwhile, UD Deputy Director Tayer Tache and a team of officers on Sunday inspected the ISTT. Speaking to the media, he informed that the department is waiting for the fund to be released to complete the project.
“We have sufficient manpower and materials required to complete the project. As soon as the fund of Rs 5 crore announced in the budget is released, we will start work and finish the ISTT on time,” Tache said.
He said the project was approved in 2009 under the Jawahar Nehru Urban Renewal Mission, and the work was almost competed in 2012 itself.
“However, 10% fund share from the government of India was not received, which halted the project. Till now we are yet to receive that fund. But the present state government is determined to complete this project in the greater interest of the public,” he said.