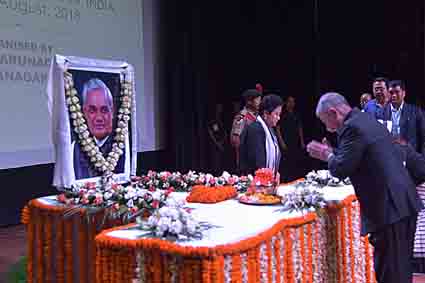 ITANAGAR, Aug 23: Governor BD Mishra paid rich tributes to former prime minister and Bharat Ratna Atal Bihari Vajpayee at the Dorjee Khandu State Convention Centre here on Thursday.
Joining the people of the state, the governor offered prayers as Vajpayee’s Asthi Kalash (ashes urn) reached Itanagar earlier in the evening and was placed in the convention centre.
Remembering the former PM for his path-breaking decisions and initiatives, the governor described Vajpayee as “one of the most prominent personalities of the century, a great politician, an eminent statesman, an able administrator, a development-oriented leader, a memorable poet, and a strong advocate of humanism,” and termed his demise an irreparable loss to India.
Mishra urged the people of the state to dedicate themselves to peace and the development of the state as a befitting tribute to the departed leader.
Chief Minister Pema Khandu also took part in the Atal Asthi Kalash Yatra along with hundreds of well-wishers, and attended the condolence meeting in memory of Vajpayee.
Pema offered floral tributes to the late leader, and prayed for eternal peace of his departed soul. He described the former PM as “the one who had the ability to bring harmony among all parties – ruling and opposition.
“It is visible from the way leaders from both sides of the aisle came together to pay tributes to the great soul,” he said.
Pema also lauded Vajpayee for successfully conducting the Pokhran nuclear tests in 1998 by evading every surveillance and spy network of foreign powers.
He credited Vajpayee with many important schemes and programmes such as the launch of the PMGSY, establishment of the DoNER ministry, introducing the BADP programmes, SSA scheme, etc.
The former prime minister’s ashes will be immersed in Parshuram Kund in the Lohit river in Lohit district.