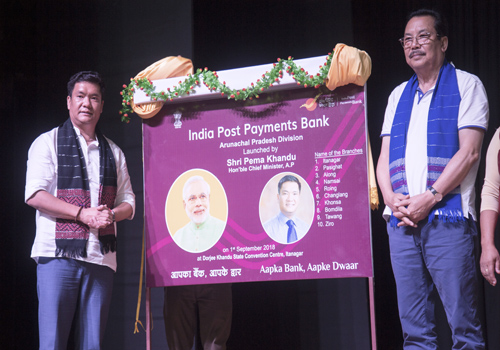 ITANAGAR, Sep 1: The Arunachal Pradesh division of the India Post Payments Bank (IPPB) was launched by Chief Minister Pema Khandu at the Dorjee Khandu Convention Centre here on Saturday.
“IPPB services will be available in 10 branches and in 50 access points across Arunachal Pradesh,” said the chief minister, participating in the nationwide launch of IPPB services by Prime Minister Narendra Modi relayed from Talkotra Stadium, New Delhi.
Pema was confident that “the IPPB services in Arunachal will be a major booster in reaching the un-banked and under-banked areas of the state. Postmen will provide doorstep banking through handheld devices, and all the customers will have Aadhaar enrollment facilities through them. The transfer of money will be done through biometric and QR code-based card.”
The chief minister later handed out two QR codes to account holders.
Speaking on other IT initiatives in the state, Pema said the state government has issued more than 2,000 digital certificates in the form of PRC, ST, income certificates, etc.
To make IT services accessible in the rural areas, 79 community service centres have been opened. The state government has also provided training to more than 1,000 government employees to impart digital skills.
The CM also said the state government aims to make all the offices of deputy commissioners, secretariats, directorates, etc, paperless through e-office by December 2021.
Deputy Chief Minister Chowna Mein, who was also present at the launch, congratulated the state’s postal division and expressed gratitude to Prime Minister Narendra Modi for bringing digital banking system to the doors of the people.
Mein said the IPPB would be the most accessible, approachable and conveniently located bank, which could be truly called “Aapka bank, aapke dwaar.”
He informed that with the launch of 3250 access points, the IPPB would be spreading its footprint and leveraging the vast postal network of nearly 1.55 lakh post offices and 3 lakh postal employees in every district, town and village of the country to serve the people.
“It will provide facilities such as instant account opening at your doorstep or post office counters, Aadhaar-based direct benefit transfer, instant 24×7 money transfer, hassle-free cash withdrawals and deposits, and convenient payment of bills with simple, affordable and reliable service,” he said.
“It aims to enhance digital payments and cashless transactions which would cover the rural and un-banked places and immensely benefit the rural people,” Mein added.
In Bomdila, MLA Japu Deru launched the IPPB branch and heaped praises on the Indian Postal Service, describing it as “the backbone of the country since Independence.”
The MLA expressed optimism that the simplified banking system would bring a great respite to the people in the banking sector. He said the full benefits of the scheme would be realized only when the people responsible for implementation of the IPPB work with a missionary zeal, vision, and commitment.
Earlier, the IPPB’s area operation manager spoke on its core issues and said IPPB was a solution for all financial transactions.
The MLA later released the special cover and distributed QR cards to 110 account holders.
In Khonsa, MLA Wanglam Sawin launched the Khonsa branch of the IPPB and its access points in Borduria, Kaimai, Khonsa village and Tupi.
Sawin urged the internet service providers and the contractors to complete the cable works within a specific time to avoid public inconvenience.
Tirap DC PN Thungon said the IPPB would offer banking services to the rural people. He added, however, that several state and central flagship programmes could not be implemented properly in the district due to internet problems.
IPPB territory officer Prateek Mazumdar presented a brief on the launch of the IPPB across the country.
ADC Techu Aran also spoke.
In Pasighat, MLA Kaling Moyong launched the local IPPB branch at the IGJ auditorium on Saturday and distributed a QR card to an account holder to mark the launch of the service in the district.
Moyong said the IPPB banking services would help the people of the district in availing banking services at their doorsteps – particularly villagers, students, farmers, womenfolk, etc.
Post Office Officer In-Charge Misa Gamlin highlighted the benefits of banking services under the IPPB, and stressed on the role of the grameen dak sevaks in providing doorstep banking services in the rural areas, towns and semi-urban areas.
Under the Pasighat branch, IPPB services will initially be provided at the Hill Top sub-office, the main post office, the GTC branch office in Pangin, and the Boleng branch office.
In Changlang, the IPPB service was launched in a function attended by, among others, government officials and members of the public. (CMO, DCM media cell and DIPROs)