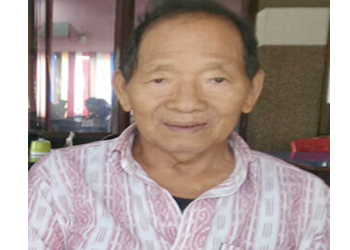 ITANAGAR, Sep 4: Retired IFS officer and additional PCCF T Millang passed away on 4 September at RK Mission Hospital here after a brief illness.
He was 68, and is survived by his wife and son.
Millang retired from service as additional PCCF (vigilance) in 2010. He had joined government service as an RFO in Tezu in 1974, and served there for two years, and later served the state in various posts.
Born in Dambuk village on 16 March, 1950, he went to government schools in Dambuk and Tezu, and did his graduation (BSc) from Cotton College, Guwahati, during 1968-71.
The Modi Welfare Society (MWS) on Tuesday deeply mourned the demise of Millang.
“He was an amiable and simple-minded person. He rose to the post of Additional PCCF through sheer hard work and determination,” the MWS said, and prayed for eternal peace of the departed soul.
Millang’s last rites will be performed on 5 September in Roing.