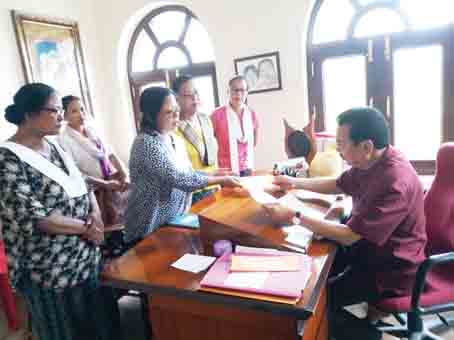 NAMSAI, Sep 6: The Women Welfare Society (WWS) of Namsai district has written to Chief Minister Pema Khandu, demanding that the unsolved rape-and-murder case of a 13-year-old girl in Empong village of Chongkham circle be transferred to a special investigation cell (SIC).
Meeting with Deputy Chief Minister Chowna Mein here on Wednesday, members of the WWS highlighted the details of the case and demanded that the case be expedited.
While it appreciated the prompt ex gratia provided to the family of the victim, the society lamented that it has been over eight months since the heinous crime and the case is moving at a snail’s pace.
“Exuding faith and confidence in the government’s policy of zero tolerance, we, on behalf of the women community of Namsai district would like to appeal to intervene and hand over the rape and murder case to the SIC for speedy expedition of the matter,” the memorandum submitted by the WWS read.
On 23 December, 2017, the 13-year-old child was found brutally raped and murdered in Chongkham circle of Namsai district.
The Chongkham police station officer-in-charge had then informed that the young child had gone to the fields with her older brother to check on stray animals.
Her brother had left to run some errands, and she had stayed back in the fields to play. When she did not return later, the villagers started a search for her. When they visited the field, the girl’s naked body was found in a nearby ditch covered with jungle bushes. There were multiple laceration injuries on her neck and both hands, as the assailant(s) had slit her throat and also chopped off three fingers of her left hand.
A student of Class 8, the young girl was on vacation.
The chief minister had also vehemently condemned the incident and directed the district administration and police to intensify the investigation and book the culprits at the earliest.
The CM had also announced an ex gratia of Rs 4 lakhs, which was soon handed over to the victim’s family by Namsai MLA Chow Zingnu Namchoom.
WWS Namsai general secretary Pinjira Namchoom informed that they are worried at the delay in arrival of the medical tests from Kolkata even after eight months of the incident.
The uncle of the victim had been arrested on 31 December as the prime suspect, along with his driver as accomplice.
Reportedly, the bail money has been set at Rs 4 lakhs and the accused remains in judicial custody as he has been unable to pay the amount.
The DCM assured the WWS Namsai that he would look to it that the case is handed over to the SIC at the earliest.