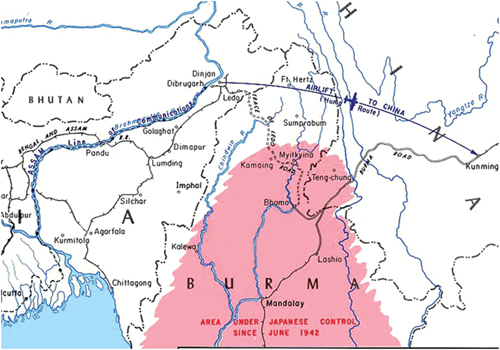 The Stilwell Road was built during World War II by the Allied forces, connecting Ledo in Assam to Kunming in China. The road is named after American General Joseph Stilwell. Also called the Ledo road, it passes through Lekhapani, Jairampur, Nampong and Pangsau Pass before entering Myanmar, and ends at Kunming in China. The road is 1726 kms long.
During World War II, the Allied forces supported the Chinese forces under Chiang Kai Shek against the Japanese forces. These forces were supported with weapons and supplies by transport aircraft of the allied forces. These aircraft carried supplies and weapons and flew thousands of sorties from airfields in Upper Assam to Kunming in China. These operations were called the Hump Operations.
The first over the Hump flight was flown on 8 April, 1942. During the Hump Operations, 650,000 tons of materials and supplies were airlifted to China at great cost of men and aircraft during its 42-month history. During the Hump Operations, it is estimated that the allied forces lost 594 aircraft, killing 1314 airmen and passengers. In addition, 81 more aircraft were never accounted for, with 345 personnel listed as missing.
Some remnants of crashed aircraft are still being discovered in remote corners of Arunachal Pradesh. Many undetonated bombs are also occasionally found from remote areas. The Hump Operations are the second biggest airlift operations in history after the Berlin Airlift operations.
The Stilwell Road was planned to augment the Hump Operations in support of Chinese forces under Chiang Kai Shek. Construction began on 16 December, 1942, from Ledo. The first allied convoy reached Kunming on 4 February, 1945. The allied engineers achieved the Herculean task of completing the 1726 km Ledo to Kunming road in about just about two years and one month.
The construction was among some of the most rough and challenging terrain and weather conditions. Many workers described the road as ‘Hell’s Road’. The road was built by 15,000 American soldiers and 35,000 local workers at an estimated cost of US $150 million. As many as 1,100 Americans died during the construction, as well as many more locals. It is known that many Arunachalee villagers participated in the construction of the road.
After World War II, the Stilwell Road went into disuse, and the condition deteriorated because of disuse for almost sixty plus years.
Towards ushering in regional cooperation, the Stilwell or Ledo Road was recently reopened on 30 December, 2015. One Chinese truck, accompanied by two light motor vehicles, carrying 82 parcels with electronic goods, organic tea, coffee, and toys crossed the Pangsau Pass, en route to Guwahati to take part in the Assam International Agri-Horti Show.
The reopening of the Stilwell Road may open up new avenues for trade and commerce, in addition to building people-to-people contact in the region. The opening of the road will give access to the commercially potent ASEAN markets under the Act East Policy. (The contributor is retired Group Captain, Indian Air Force)