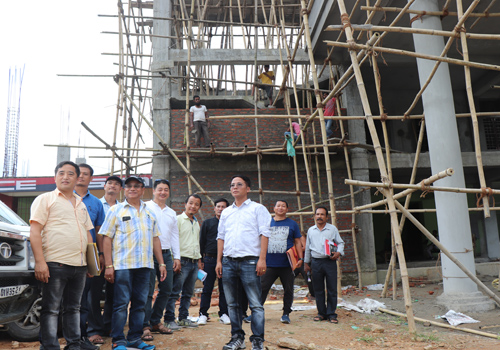 ITANAGAR, Sep 9: Rural works department officials led by Chief Engineer (West Zone) Takeng Welly on Sunday inspected the ongoing construction work for the model police station and women police station at Bank Tinali here.
Speaking to the media, Welly said the model police station would be one of the best in the state and would have all the facilities befitting its stature.
Construction work is underway on a war footing, and it is expected that the construction part will completed by December, he said.
“Earlier, the government sanctioned Rs 6 crore, but we have sent a proposal for an additional Rs 2 crore to complete the project. The police station will have sufficient parking place, modern amenities, rest room, reception room, strong room for keeping weapons, ladies changing room, child care, computer room, room for the IO, officers, crime branch, and other facilities which the police department may like to include,” the CE said.
RWD Itanagar Division EE Techi Jobae and AE G Karbak along with other engineers and officers were present on the occasion.
Capital SP M Harsha Vardhan also said the model police station would have several modern facilities. DGP SBK Singh is guiding the capital police in developing the Itanagar model police station, he added.