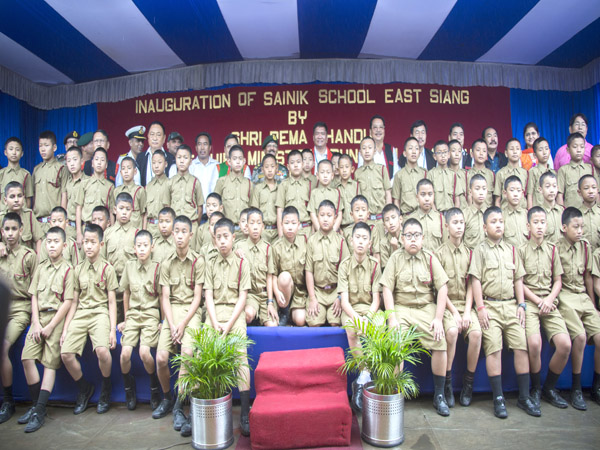 NIGLOK, Sep 11: Chief Minister Pema Khandu on Tuesday dedicated Arunachal Pradesh’ first Sainik School to the people of the state in an impressive function here in East Siang district.
The Sainik School began its first academic session with an intake of 60 students selected from all over Arunachal and other parts of the country.
“With today’s inauguration, the decision for locations of other two Sainik Schools in the state will be reached with due consultation to cover the eastern and western belts of the state,” Pema said in his inaugural speech.
He said opening of Sainik Schools would provide opportunities for the youths of the state to pursue careers in the armed forces, and other prestigious careers.
Informing that the school is at present functioning from a temporary building, the CM assured to provide support to meet the requirement of hostel and academic buildings. He also promised to start work on establishing the school structures at the permanent site this year, and to complete it within three years.
The chief minister said the state rightfully deserves Sainik Schools “as Arunachalees are known for their patriotism, which is exemplified through greetings of ‘Jai Hind’ by the locals for the jawans guarding the borders.”
Pema congratulated the first-batch students, and appreciated the role of Goalpara Sainik School Principal, Captain Edwin Jothirajan, for his efforts to ensure early establishment of the school.
The chief minister thanked Prime Minister Narendra Modi and Defence Minister Nirmala Sitharaman for granting three Sainik Schools for the state. He also thanked Deputy Chief Minister Chowna Mein for making great efforts in finalizing the allotment of 100 acres of land for the school by undertaking field visits and successfully liaising with different government departments.
Earlier, Mein in his speech said no stone would be left unturned in providing infrastructure support for running the school.
Education Minister Honchun Ngandam, Maj Gen Bhaskar Kalita, and Education Secretary Madhurani Teotia also spoke.
State BJP president Tapir Gao, Health Minister Alo Libang, Advisor to CM Lombo Tayeng, Lok Sabha MP Ninong Ering, Sainik School Principal Lt Col Ashok and other dignitaries were present on the occasion. (CMO)