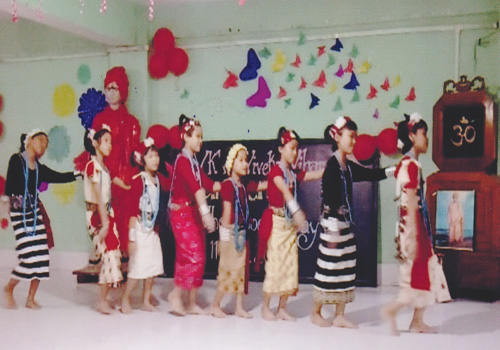 ITANAGAR, Sep 11: Papum Pare Deputy Commissioner Dr Joram Beda advised students to be disciplined to achieve their goals, during his address at the Universal Brotherhood Day celebration at VKV Vivek Vihar here on Tuesday to mark the 125th anniversary of the historic Chicago address of Swami Vivekananda.
The DC also distributed prizes to the students of Government School Police Colony who earlier won various competitions which were held to mark the occasion.
At VKV Nirjuli, Finance Commissioner Kaling Tayeng addressed the students and spoke about the importance of the day.
He also distributed prizes to the winners of various competitions.
In Longding, the day was jointly celebrated by Arunjyoti and the Wancho Cultural Society (WCS) at Late Tingpong Wangham badminton hall.
Longding ADC T Ekke distributed commendation certificates and cash awards, sponsored by the WCS, to meritorious students of the Wancho community.
At VKV Koloriang, CRPF Sub-inspector Sumit Kumar Singh highlighted the role that schools play in inculcating the feeling brotherhood among students. He encouraged the students to spread the message of love and universal brotherhood.
The state youth wing of the Narendra Modi Vichar Manch organized a plantation drive at VKV Nirjuli to mark the day.