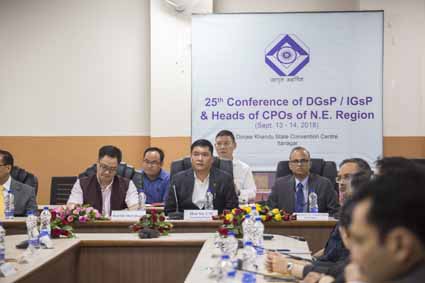 ITANAGAR, Sep 13: Chief Minister Pema Khandu stressed on strengthening the information-sharing mechanism, follow-up actions and coordination between the police of the different Northeast states, so that the security apparatus in the region is improved.
He was addressing the 25th annual conference of the directors general of police, inspectors general of police and heads of the central police organisations of the NE region at the Dorjee Khandu State Convention Centre here on Thursday.
“Peace and order are essential for the development and economic growth of the state. Security and development have to go together, and such goals cannot be achieved without an efficient state police,” Pema said.
He said the security situation in the region has considerably improved because of the “fresh development impetus given by the Centre.”
The chief minister applauded the Centre’s role in improving the presence of people from the Northeast in the central paramilitary forces and in Delhi Police. He encouraged youths from the region to join these forces, and urged the police organisations to carry out awareness programme in this regard.
Pema said the Northeast must be looked at as one entity when dealing with security matters, adding that the Assam Police has a pivotal role to play in the security of the region as the state shares boundaries with almost all the other states of the region.
“Although Arunachal has no home-grown insurgency, the three eastern districts of the state are affected by it,” he said, but expressed confidence that the police, the paramilitary forces and the Army would tackle the matter efficiently.
Union Minister of State for Home Affairs Kiren Rijiju, who also attended the programme, said the government is trying to upgrade the capability of the police through infrastructure creation and specialized training.
He said the Assam Rifles Academy in Diphu (Assam) has been identified for providing specialized training to police personnel of the NE states in counter-insurgency operations.
Rijiju also informed that the NIA has been conducting training modules for police from the region in investigation of terror-related cases.
“Although the overall security scenario in the northeastern region has shown remarkable improvement over the years, yet there are a number of challenges remaining to be addressed by security forces,” he added.
Rijiju, however, said police officers must exercise calmness, refrain from profanity, and exercise empathy even in tense situations. People have expectations from the police, so they tend to be more demanding and abusive towards the police, he said.
He also said the police could play a positive role in promoting tourism by conducting themselves in decent and helpful ways. (CMO)