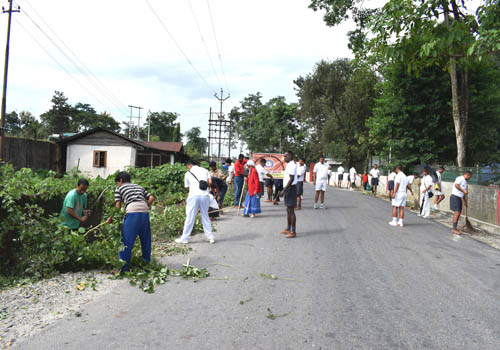 EMCHI, Sep 21: Personnel of the 12th Bn NDRF under the command of Deputy Commandant PN Singh, along with residents of Gumto and Emchi villages participated in a cleanliness drive here in Papum Pare district on Friday.
The commandant spoke about the importance of developing the habit of cleanliness, and urged the villagers and the NDRF personnel to maintain cleanliness in the area.
Personnel of the 12 Bn NDRF’s D company along with residents and shop-owners also participated in a cleanliness drive at Hollongi market, under the supervision of Inspector Indra Singh Bisht.
A similar drive was also conducted at Kimin market on the same day by the urban development & housing department in collaboration with the All Kimin Students’ Union led by its assistant general secretary Niri Sanjay.
The Papum Pare district administration also conducted a cleanliness drive in the Yupia township area on Friday under the ‘Swachhta Hi Seva’ campaign.
Avenue plantations were also carried out by the DRDA as part of the programme. Cleanliness drives were also organised at all administrative centres, including Doimukh, Kimin, Balijan and Sagalee.
Yupia ADC Tabang Bodung, HoDs, staffers, and ITBP and APP personnel participated in the drives. (With DIPRO input)