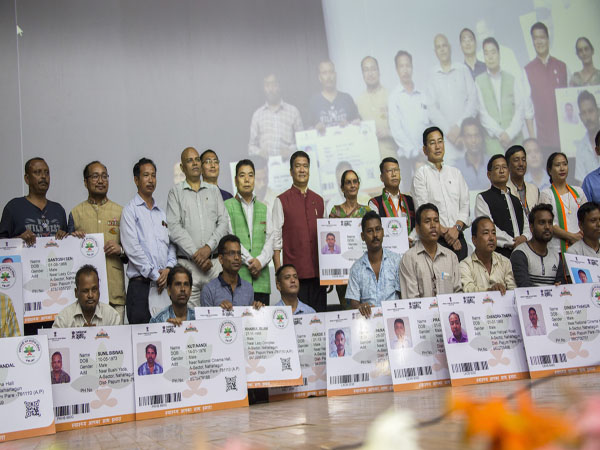 Cashless treatment of Rs 5 lakh per family per year

ITANAGAR, Sep 23: Chief Minister Pema Khandu on Sunday dedicated the Chief Minister Aarogya Arunachal Yojana (CMAAY), a universal healthcare scheme of the state government, to the people of the state, coinciding with the nationwide launch of Ayushman Bharat – Pradhan Mantri Jan Aarogya Yojana (PMJAY) by Prime Minister Narendra Modi.
The chief minister said the state’s healthcare scheme would be dovetailed with the PMJAY with Rs 50 crore earmarked to provide cashless treatment of Rs 5 lakh per family per year.
He said the state’s healthcare scheme would provide coverage to the beneficiaries who were left out of the PMJAY.
About 88,928 families, as per the 2011 socioeconomic caste census in Arunachal, are eligible for the PMJAY, out of 3.05 lakh families.
“The CMAAY will provide healthcare coverage to the remaining 2 lakh families, which will include all state government employees, tribal families, and non-APST permanent residents,” said the CM.
To enroll for the scheme, a person has to log onto www.cmaay.com website or use the mobile app ‘Aarogya Arunachal’ to register themselves using Aadhaar information. The software will automatically detect whether the person is eligible under PMJAY or CMAAY.
“Besides enrolling online and through the government hospitals,” the CM said, “beneficiaries can also register for the healthcare schemes during the jan sunwai sammelans or the sarkar aapke dwar programmes being carried out by deputy commissioners every month.”
He said that about 14,000 beneficiaries have already enrolled for the PMJAY-CMAAY in Arunachal, and 38 persons are going through pre-authorization “where 21 claims have already been raised after the discharge of the patients. ”
Pema said the CMAAY was “in ready mode” months before the formal launch of the PMJAY.
The state’s healthcare scheme has been redesigned and necessary changes incorporated, as the earlier CM’s universal health insurance scheme became a failure due to various technical and implementation issues.
The CMAAY offers health coverage in assurance mode instead of the earlier insurance mode. Also, the health coverage amount in the present scheme has been increased to Rs 5 lakh from the previous Rs 2 lakh.
Later in the programme, the chief minister along with Health Minister Alo Libang and Sports Minister Dr Mohesh Chai gave away health insurance cards to the beneficiaries.
Also present on the occasion were MLAs Tamar Murtem, Tage Taki and Olom Panyang.
In Yingkiong, Upper Siang DC Duly Kamduk launched the PMJAY at the district hospital.
The DC urged the health department to enlighten the people throughout the district about the scheme through various means, “so that maximum number of bonafide beneficiaries can reap the benefit of this scheme.”
He instructed the department to incorporate distribution of forms and registration of beneficiaries in the next sarkar aapke dwar programme, scheduled to be held in Tuting in October.
Medical Superintendent Dr Joseph Tekseng spoke about the health insurance scheme and updated the registered beneficiaries’ list of the district. A CMAAY card was also handed over to a beneficiary.
DMO (in-charge) Dr Ahik Miyu, HoDs, administrative officers and others also attended the function.
In Pasighat, East Siang DC Tamiyo Tatak launched the PMJAY and the CMAAY in the presence of Joint DHS Dr D Raina, DMO Dr M Perme, MS Dr YR Darang, doctors, nurses, paramedical staff and beneficiaries at the Bakin Pertin General Hospital.
Tatak distributed CMAAY cards to beneficiaries and said “the success of a beneficial scheme like health insurance depends on its successful implementation and continuation.”
Drs Raina, Perme and Darang also spoke. (CMO with DIPRO inputs)