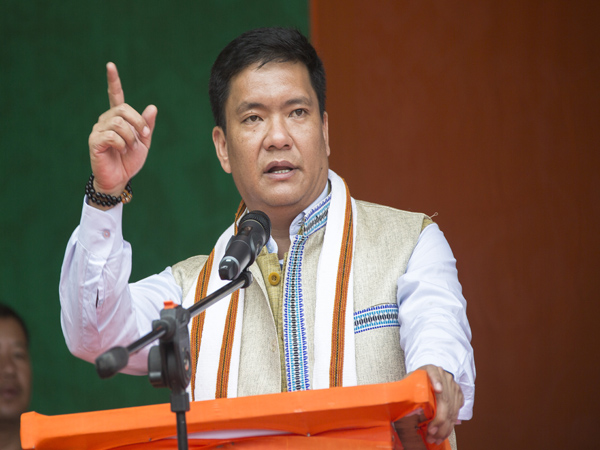 ITANAGAR, Sep 25: Chief Minister Pema Khandu said he is against the trend of candidates being elected unopposed in parliamentary or assembly elections, asserting that such culture “is against the democratic spirit.”
Speaking at the concluding session of the three-day Yuva Sammelan organized here by the state unit of the Bharatiya Janata Yuva Morcha on Tuesday, Pema said, “We will not go appeasing the opposing candidates to back down with lure of schemes or plump posts in the government.”
He also called for elections in his home constituency, Jang-Mukto, which has witnessed uncontested elections for the last 15 years.
Referring to the 2014 elections when 11 MLA candidates from Arunachal were elected unopposed, the chief minister said such trend must stop, and advocated having elections instead of direct nominations in every constituency, “with full democratic process.”
Pema said such appeasement was the cause for corruption “and continuing with such practice holds no meaning being in the BJP, which is a party with a difference.”
Calling for uprooting the money culture from elections, the chief minister called for a “jan andolan” involving religious bodies, community organisations, political parties, etc. He also called for strict monitoring of electioneering by the election commission.
Lauding the leadership of Prime Minister Narendra Modi, Pema said the PM initiated development projects “which were unthinkable earlier,” such as “railway lines to Tawang and along the foothills of Arunachal.”
He also credited the PM with completion of all pending projects in the Northeast which had been initiated by the previous Congress government.
“Had Modi been the PM 15 years earlier, the development scenario of the Northeast would have been completely different,” he said, and rued that “the Congress did not even have the will to complete the projects that it had initiated.”
The chief minister urged the party workers to rise above “individual following” and adopt politics based on the party ideology.
“Our loyalty must lay with party rather than favour a certain leader or an individual,” he said.
He also called for adopting the BJP’s ‘Sabka saath sabka vikas’ mantra to reform “the existing system that favours only the rich and powerful.
“Reforms must be initiated when we have the willpower to do so; else time will come when we might have the will but no power to act,” he said.
RWD Minister Bamang Felix and state BJP president Tapir Gao also spoke.
The dignitaries present also offered shraddanjali to Pandit Deendayal Upadhyaya on his birth anniversary.
The chief minister later handed out the tug-of-war winner trophy to Lower Siang and Kurung Kumey team in the girls and boys category, respectively. He also gave away the winner’s trophy to the cultural team from Anjaw. (CMO)