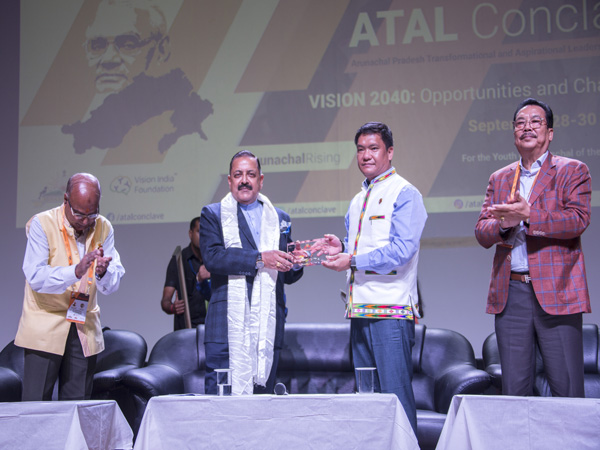 ITANAGAR, Sep 28: Union DoNER Minister Jitendra Singh inaugurated the three-day ATAL (Arunachal Transformation & Aspirational Leadership) Conclave at the Dorjee Khandu State Convention Centre here on Friday, in the presence of Chief Minister Pema Khandu, Deputy Chief Minister Chowna Mein, and other dignitaries.
Singh congratulated the state government for conducting the first-of-its-kind conclave targeted towards people in the age group of 18 to 30 years to engage them proactively in areas of public policy and governance.
“Former prime minister Atal Bihari Vajpayee initiated the work of transforming India, which is being taken up by the current PM. The wholesome growth of India is not possible if one part of the country lags behind,” Singh said.
He said it was under Vajpayee that the Northeast got unprecedented attention from the Centre.
“There is so much to learn from the Northeast, and the rest of India should start coming closer to this region,” he said.
The DoNER minister commended the chief minister for “taking a decisive action over preference of land for the greenfield airport” in Hollongi.
“Having resolved the issue of land, there should be no looking back,” Singh said, and announced that the foundation stone for the airport will be laid by December this year.
Earlier, the chief minister in his address said, “The whole idea of the ATAL conclave is to know what our youths are thinking, what their aspirations are, and how they wish to contribute for the betterment of Arunachal.”
He expressed happiness that about 150 youths from all over the state have come together in response to the call for participation.
“The state government will try to incorporate all the suggestions and solutions proposed,” he said.
“Due to limited opportunities, youths are forced to migrate to better places, resulting in brain drain. The objective of the conclave is to create opportunities for youths by taking them onboard and engaging them in the growth process,” Pema said.
Deputy Chief Minister Chowna Mein in his address said that, with its strategic location, Arunachal Pradesh has the potential to serve as the link between the ASEAN countries and India.
“Arunachal, being the largest state in the Northeast region, and with hilly terrains, has many opportunities as well as challenges in the field of education, health, agriculture and allied sectors, and connectivity,” he said.
The ATAL conclave, he said, is the third one after ‘Dream 2027 – Arunachal Conclave’ and ‘Perspective Planning on Resurgent Agriculture & Allied Sectors.
“In the last two years the government has also made budget preparations participatory by inviting NGOs, CBOs and women’s organizations for consultations, and all others, including students, via web portal, with the intention of involving every stakeholder in the policymaking,” Mein said.
He exhorted the participants to make optimum use of the platform, engage in meaningful deliberations, “and be partners in drawing a roadmap for the development of the state in the next two decades, for the kind of Arunachal they wish to see by the year 2040.”
He asked the expert panels comprising senior government officers to take note of the deliberations and, based on them, propose a feasible roadmap to the state government, “which would be implemented in the coming years.”
The first day of the conclave witnessed an impressive interactive session between the younger minds of Arunachal and representatives of the state government.
Issues related to education, health, sustainable management of water, and sanitation were discussed, and officials from the respective departments addressed the questions raised by the young participants.
Nehru Memorial Museum & Library Director Shakti Sinha earlier spoke on the Act East Policy in his keynote address. (CMO)