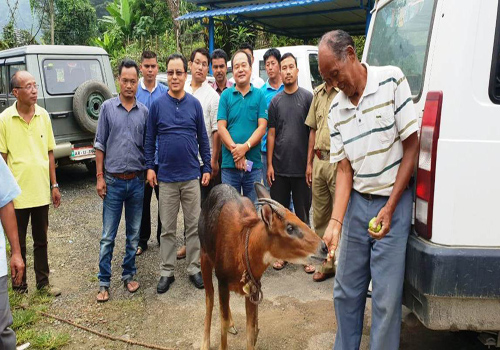 KHONSA, Sep 29: An orphaned Himalayan serow was relocated to a zoo four years after it was rescued in Tirap district, thanks to the initiative of Tirap Deputy Commissioner PN Thungon.
The animal was rescued from the hills of Kheti village by one Waren Aboh nearly four years ago. Since then, Abo had been taking care of the animal.
Thungon handed over the now full-grown animal to the Khonsa division of the forest department, which translocated the animal to the mini zoo in Miao in Changlang district.
The Khonsa DFO commended the rescuer of the animal, Aboh, for taking good care of the serow. (DIPRO)