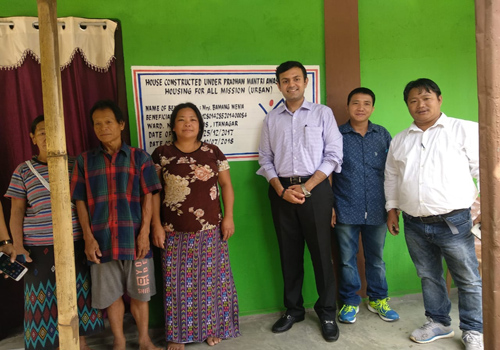 ITANAGAR, Oct 1: Capital Complex Deputy Commissioner Prince Dhawan on Monday inspected the home built under Pradhan Mantri Awas Yojana (PMAY) – Urban. The beneficiaries were paid Rs 1,50,000 each to construct houses.
A total of 2401 beneficiaries have been identified in the Itanagar-Capital Complex region; out of these nine were paid through direct benefit transfer (DBT) on Monday.
The DC visited the homes of the beneficiaries to ensure that the houses have been completed. He interacted with the families and enquired about their well-being
The DC informed that Itanagar Subdivision I has a total of 265 beneficiaries, and Itanagar Subdivision II has 202 beneficiaries.
Naharlagun Division I has 909 beneficiaries and Naharlagun Subdivision II has 649 beneficiaries.
Dhawan said all the beneficiaries would be provided with the amount once their completion report is submitted.
The PMAY is an initiative of the government of India through which affordable housing
will be provided to the urban poor, with a target of building 20 million affordable houses by 31 March, 2022.
The DC was accompanied by Itanagar EAC Hengo Basar. (DIPRO)