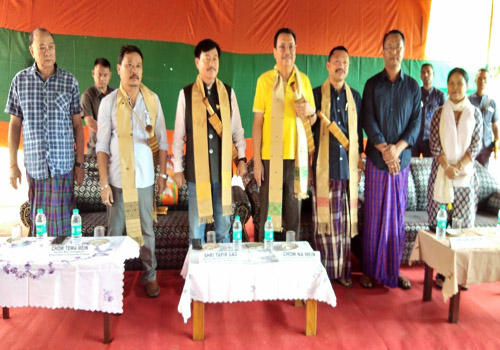 CHONGKHAM, Oct 13: Deputy Chief Minister Chowna Mein said that the coming state elections will be fought with Pema Khandu as the chief ministerial face.
He was speaking at a BJP event in Alubari.
He said that there should be no confusion on Pema’s chief ministerial candidature.
Mein further said that BJP state chief Tapir Gao will be the face of the party in the forthcoming parliamentary elections from Eastern Arunachal.
Meanwhile, the BJP has said that it has no alliance with any party and that it will go solo in all the 60 assembly constituencies and two parliamentary seats for the upcoming state and parliamentary elections.
BJP state president Tapir Gao said that “though BJP has forged a post poll alliance with the National People’s Party (NPP), but it does not amount to being political allies at all levels and stages”.