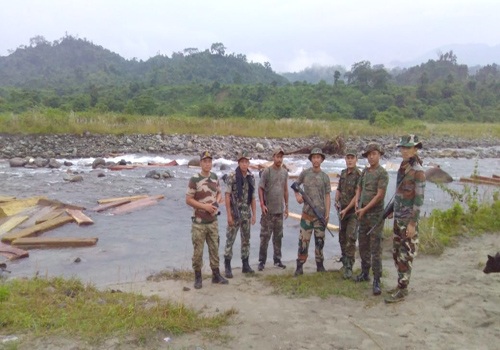 [ Amar Sangno ]
ITANAGAR, Oct 14: Reports of rampant timber smuggling resurfaced in Doimara area under West Kameng district bordering Assam when a group of IRBN personnel and forest officials spotted hundreds of logs floating downstream in the Shergaon Nallah (Also known as Delsiri River in Assam) earlier this month.
Spotting the freshly sawn logs, the security personnel alarmed the authorities to take immediate action. Accordingly, the authorities instructed the security personnel to destroy the logs with help of chainsaws.
“This game of hide and seek between forest officials and smugglers has been continuing since decades,” said a local who did not want to be named.
While he went on to claim that the forest department has been ignoring the issue despite knowledge of rampant timber operations, he suggested that the authorities ensure regular patrolling in the entire foothill range to check smugglers.
Doimara is a densely covered forest area near the Eagle Nest Wildlife Sanctuary. It is said that the foothill range, which falls under the Rupa forest range officer, earlier served as a safe haven to underground outfits. However, after the Centre launched offensive policy against insurgent groups in the Northeast, the activities of the outfit groups have significantly declined.
Reportedly, the timber smugglers take undue advantage of insurgency apprehension among locals and rampantly operate in the area, which is a grave threat to forest resource and wild life.
When contacted, the range forest officer (RFO) of the foothill area confirmed the report informing that they had seized and destroyed the logs.
The Supreme Court had imposed ban on felling of trees in any state without prior permission from the union government on 12 December 1996, a year after TN Godavarman Thirumulpad filed a petition.
The RFO said that unless their Assam counterparts check illegal timber smuggling, the menace will continue no matter how hard security and forest officials at Arunachal tried, as the entire stretch from Bhalukpong to Doimara is porus and has no connectivity for effective patrolling.
“The state government should intervene involving our Assam counterpart through high level meeting to check the rampant menace,” he added.
The villagers in Doimara also sought the government’s help to strengthen the staffers of the forest department and to equip them with modern weapons to thwart smuggling.
They also want the non-Arunachalese to be registered at the IRBN check gate at Kamengbari and Doimara until Inner Line Permit system is properly implemented in the area, while also empowering the IRBN personnel to arrest any person found smuggling timber.
The villagers also felt that road connectivity is urgently required from Bhalukpong to Doimara through the foothill area, without touching Assam.
Further, the West Kameng district superintendent of police Raja Banthia informed The Arunachal Times that a patrol team is sent regularly to the area to check illegal timber operations.
However, the SP added that the district police unit is facing shortage of force and is planning to establish a 3rd IRBN headquarter at Doimara, and is awaiting clearance from the forest department.
This, he said, is partly to check such illegal menace and mostly to instil sense of security among the villagers and inhabitants of the area.