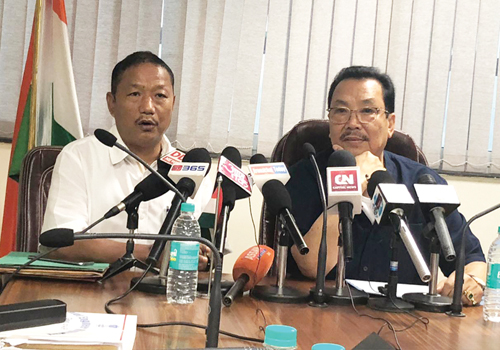 Staff Reporter
ITANAGAR, Oct 22: The state government on Monday denied the allegation levelled by Arunachal Pradesh Congress Committee (APCC) president Takam Sanjoy over the four-laning of the Itanagar-Papu Nallah highway, terming the allegation baseless and concocted.
“I vehemently oppose whatever allegation has been made by the APCC president, as it is false and concocted,” Deputy Chief Minister Chowna Mein, flanked by RWD Minister Bamang Felix and top officials of the government, said during a hurriedly convened press briefing at the civil secretariat here.
Sanjoy had said that the right of way (RoW) on a four-lane highway should be 30 metres. “The RoW of the ongoing four-lane highway is indeed 30 metres, as adopted by the state government under Chief Minister Pema Khandu,” Mein said.
The DCM, who is also the PWD, finance, and planning minister, said the government and the district administration would soon start demolishing all illegal structures lying within 30 metres of the RoW.
“The Itanagar to Papu Nallah four-lane has three years’ deadline to be completed; so we had decided to start demolishing the structures in a phased manner. However, on 8 October the state cabinet decided that the demolition of the structures within 30 metres of the RoW will begin soon at one go,” Mein informed.
“We have given enough time to the structures’ owners to demolish the structures themselves, as many of them had pleaded that they be allowed to do so,” he said.
Following the cabinet decision, the capital complex district administration issued an eviction notification stating that it would start the process of demolition on 23 October.
On the APCC’s contention that compensation should be paid to the structures’ owners, the DCM questioned why the state government should pay compensation against structures falling under the RoW.
He also denied the involvement of any political leader in any form of scam vis-à-vis the Itanagar-Papu Nallah highway.
“There is no hide-and-seek in the process, and the Pema Khandu government is a transparent and corruption-free government,” Mein said, adding that the state government has taken strict action against those involved in the Joram-Koloriang TAH scam.
The DCM also defended the capital complex deputy commissioner.
“There is no question of demanding transfer and action against the DC since the district administration has categorically clarified that the demolition of the structures within 30 metres of the RoW is yet to be carried out in some places, and that it would be done based on needs,” he said.
Meanwhile, on being queried on the CoSAAP issue, the DCM reiterated the state government’s stance, saying it would “not back down under pressure tactics.”