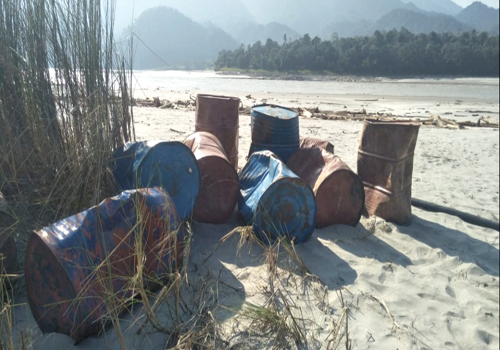 ITANAGAR, Oct 23: The All Arunachal Pradesh Students’ Union (AAPSU) on Tuesday endorsed the proposed peaceful protest rally-cum-dharna to be held by its Siang valley-based federal units at Pasighat on 24 October to press their demand for a water treaty with China.
“The demand of All Upper Siang District Students’ Union, All Siang District Students’ Union, and All East Siang District Students’ Union for a water treaty between the governments of India and China is legitimate and is the only way forward,” the AAPSU stated in a release.
It said it was disheartened that the central government remained “nonchalant and indifferent” to the woes of the people despite the havoc and inundation caused by flashfloods in the Siang river affecting several villages since ages.
“The recent drying up and then unprecedented water surge the very next day in Siang river that brought down along with it several floating barrels bearing Chinese alphabet insignia of isocyanate (C6 H9 O2 N2), which is a explosive mainly used in heavy construction site, have clearly vindicated our stand that something amiss is going on across the border, which the union government has time and again played down on the pretext of natural calamities,” the union said.
It urged the government of India to “reach out for a water treaty, rather than remaining in denial mode, lest one or the other day all the rivers emerging from Tibet region which is under Chinese occupation will face the same fate as that of river Siang.”
The AAPSU also lamented that “the much-touted proposed visit of an inter-ministerial team to the flood-affected area of the state after the request of Chief Minister Pema Khandu on 4 September 2018 to Union Home Minister Rajnath Singh is yet to see the light of the day.”