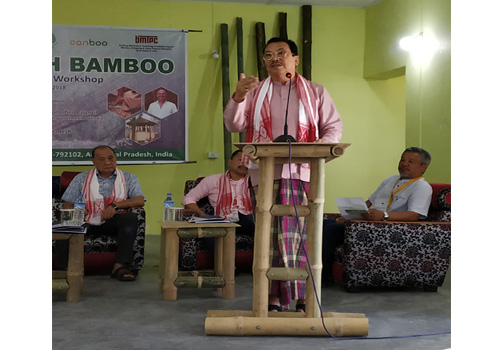 NAMSAI, Oct 24: Deputy Chief Minister Chowna Mein called for marketing Arunachal Pradesh through bamboo and its products as he highlighted how the Northeast region has the highest bamboo potential in the country.
Inaugurating a 10-day workshop on ‘Building with Bamboo’ at the Golden Pagoda Resorts, Tengapani in Namsai district on Wednesday, the DCM informed that earlier in a GST Council meeting, he proposed for reduction of GST rate on bamboo furniture and its products from 28 percent to 12 precent.
Accordingly, the same was accepted and reduced to 12 percent by the GST Council.
He also highlighted the tremendous scope for establishing economic and cultural relations with the South East Asian countries, for which he suggested improvisation of infrastructures and road communication.
He added that entrepreneurship is one such area where one can improvise and sale one’s finished products to attract outsiders.
“For this to happen, we need both political and social will and support of the expertise,” he said.
Mein also said that the bamboo workshop has been conceptualized to enable the people to learn from the experts and acquire skills in building durable houses with bamboo.
He added that for this reason, the workshop has been made purely a practically oriented one.
The DCM hoped that the workshop will be a fruitful one and requested the experts to provide an idea and draw a road map on how to utilize the vast resources of bamboo of this Himalayan state for the economic benefit of the people and for the future generation.
International Expert on Bamboo structures, Jorg Stamm said that the bamboos of Arunachal Pradesh have the potential to be exported to the outside world.
Highlighting multiple uses of bamboo, he said that there is huge potential for bamboo-based industrial development and construction of durable houses from the bamboos found in the state.
South Asia Bamboo Foundation CEO Kamesh Salam said that the workshop is being organized to transfer technology and hands-on skills to the local entrepreneurs of the state.
Chongkham MLA Chow Tewa Mein said to identify for which purpose our bamboos are good at and to make best use of them accordingly.
Namsai MLA Chau Zingnu Namchoom suggested using bamboo as substitute for the woods to economically uplift the people as the timber business had been banned in the state.
Apart from international experts on bamboo structures from Colombia, United Kingdom and Bhutan, 28 participants, including 12 architects from the states of Nagaland, Assam, Kerala, Karnataka, Madhya Pradesh, Maharashtra, Tamil Nadu and Manipur, and about 25 participants from Arunachal Pradesh are participating in the workshop.
The 10 days training workshop on bamboo from 24th October to 2nd November 2018 is jointly organized by the South Asia Bamboo Foundation (SABF) and Building Materials & Technology Promotion Council (BMTPC), Ministry of Housing & Urban Poverty Alleviation, Government of India and sponsored by the Government of Arunachal Pradesh.
Among others, State Bamboo Development Agency Deputy State Mission Director Dr G Murtem, Deputy Commissioner Dr Tapashya Raghav, HoDs, officers from the State Forest Research Institute, VC Arunachal University of Studies, Namsai also attended the programme. (DCM Media Cell)